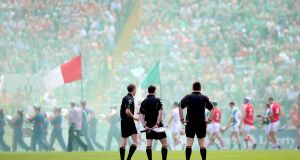 “The focus is on mentoring the new referee, making sure we get him or her through the first six or eight or 10 months,” said Pat Doherty, the GAA’s national match officials manager. Photograph: James Crombie/Inpho

The GAA’s admission that the single biggest challenge of their new Referee Development Plan is the recruitment and retention of referees presents an obvious dilemma; it gets more difficult to raise standards from a decreasing pool of referees.

The Referee Development Plan, a key part of the GAA’s own Strategic Plan 2018-2021, also outlined the somewhat lofty aspiration “to recruit, develop and inspire referees to reach their full potential and officiate at the highest level, and control our games, uniformly and consistently, in accordance with the playing rules” – all nevertheless worthy.

Speaking about this challenge, Pat Doherty, the GAA’s national match officials manager, outlined some the enduring difficulties in referee recruitment and retention, none of which are particularly new.

A perceived increase in criticism via social media hasn’t helped, but the plan has outlined a somewhat softer approach of “mentoring” new referees rather than the traditional method of assessing them.

“The single biggest issue I would see here is not for referees, it’s for the association, and that’s the recruitment of referees,” said Doherty.

“We’ve all heard it around the country, counties saying, ‘we don’t have enough referees’. That is a genuine difficulty, counties are staggering the scheduling of games that they might have lads who might referee two or three games on a weekend.

“We ran a campaign four years ago, which was quite successful for numbers. It’s probably that we need to be more proactive now. If you take any volunteer – you’re going to get a volunteer by asking him or her. Maybe we haven’t been asking him or her enough. We will have a focus on recruitment, how we get to the people we need to. Following on then, the retention.

“The focus is on mentoring the new referee, making sure we get him or her through the first six or eight or 10 months.”

Increasing the level of professionalism, in terms of remuneration, or indeed perks, doesn’t necessarily increase standards, according to Doherty. Hence there is no immediate appetite to create a semi-professional panel of referees.

“It’s certainly not something that’s on the agenda at the minute. Whether it ever will or not, I’m not sure. We have a pretty sweeping three-year plan here. Does it come down to that? A few euros for referees in games?

“And I’m not sure that semi-professionalism will help improve standards. I’d have a pretty strong argument that standards are high anyway. Would it improve the standard because it’s perceived that he has more time on his hands, because he is semi-professional or getting paid for it? The commitment that the guys at the top level give is outstanding. They give many hours volunteering time to it.

“So I don’t think there is any question about them being professional, whatever about being somewhat remunerated for it. Which means they have to have jobs. They’ll still have families. But we all watch sport, I watch sport. You see professional referees making mistakes, because they are human.”

One clear discrepancy is the number of female of referees. Just over 1,000 club and county referees contributed to a survey in drawing up the plan, and only four of those happened to be female.

It could take a while before the GAA can attract more female referees at inter-county level, and the day of a woman refereeing an All-Ireland final would appear to be some way off.

“The number of female of referees we have you could count on one hand. So it’s a tiny, tiny number. Yes we want to increase that number.”

Getting more former intercounty players involved is also seen as a way of improving recruitment and retention of referees; that also presents some enduring challenges, even if fast-tracking the process.

“We do have a number of referees that are former inter-county players, maybe not at the highest level,” said Doherty.

“We put out a recruitment plan four years ago, looked as in terms of fast-tracking. Did they bite? The answer is no. I fully respect where intercounty players come from, their follow-on appears to be towards coaching, then maybe media. We’d be delighted if more became referees, but being realistic we’re not going to get a big number.

“We do have David Sweeney, formerly Laois, referring in Dublin. Anthony Nolan and John Keenan played for Wicklow, former Dublin footballer, Dermot Deasy, is also a referee. Does it make them a better referee? I don’t know. I’d love if we could test it.”