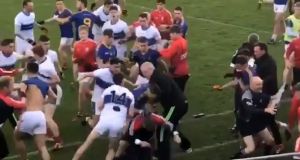 A fight broke out between East Kerry and Dingle’s Kerry SFC semi-final replay.

The Dingle official who appeared to be caught on video punching an East Kerry player in the Kerry senior football semi-final replay last Sunday has been handed a proposed eight-week ban.

The Kerry’s Competitions Control Committee met on Monday night to consider the referee’s report and decide what action to take after violent scenes erupted in the aftermath of Dingle beating East Kerry 4-13 to 0-12. They have proposed the ban for the official, who has been charged with a Category 2A offence.

The Dingle mentor, who has three days to appeal the ban, has not been named by the Kerry county board. Gerry O’Sullivan, the East Kerry manager, who was also sent to the stand, was reportedly not found guilty of any offence and received no ban.

The match footage most widely circulated on social media showed a Dingle team official running on to the pitch and punching East Kerry’s Dara Moynihan, who is knocked down to the ground.

In response to the melee, referee Paul Hayes sent off one player and a member of each team’s management.

The first dismissed player was Paudie Clifford, and his brother David was sent off later in the match following an altercation with Dingle’s Mikey Boyle.

The minimum punishment facing a team official for “any type of physical interference with an opposing player or team official” under 7.2 (c) is eight weeks (which Wexford hurling manager Davy Fitzgerald received in 2017 for getting involved with Tipperary’s Jason Forde).

Dingle are scheduled to play Dr Crokes in the final on Sunday at Austin Stack Park in Tralee.