Cratloe didn’t score in final 20 minutes, after leading by six points and looking in control 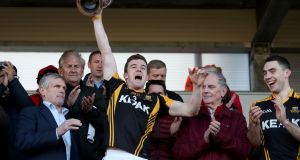 Ballyea claimed their second Clare Senior hurling championship at Cusack Park Ennis on Sunday, coming from behind to defeat Cratloe in dramatic fashion.

A Brandon O’Connell point in the 52nd minute gave the men in black and amber the lead for the very first time in the game, and they pushed on with a goal and two points to clinch the title.

Cratloe didn’t score after the 38th minute, suggesting that a quest for a football and hurling double this season, proved to be a bridge too far for a club that relied heavily on dual players.

They bowed out at the penultimate stage of the football competition a week earlier - to St Joseph’s Miltown - and eleven of yesterday’s starters were also there for the throw-in of the football semi-final.

But it was the comeback made by Ballyea that proved the main talking point, amongst the crowd of 7,040. They trailed by seven points early in the second period with Cratloe looking odds on to take a title last won in 2014. Nevertheless, a Tony Kelly lead Ballyea dug deep and took full advantage of some poor second half shooting by the south-east Clare side.

Cratloe began the game in bullish fashion and found themselves 0-3 to 0-1 in front by the fifth minute, thanks to two points by Billy Connors and one from the ever-threatening Cathal McInerney. They led by 0-6 to 0-5 by the 20th minute, and tellingly, all Ballyea’s scores at that point had been via free-taker Niall Deasy. Whereas Cratloe’s were all from play and scored by four different attackers. Cratloe went in 1-10 to 0-9 ahead at the break with McInerney batting to the net in the shortly before the change of ends.

Despite Cratloe opening up a seven point advantage after the break, they were guilty of hitting eight wides in the second half - a contributing factor in the final outcome. Deasy’s free-taking kept Ballyea in touch and when O’Connell’s point sailed over with eight minutes remaining, the game flipped. Martin O’Leary followed with an opportunistic goal and he and Deasy added points to clinch a title last won in 2016.