Game to take place on Saturday night; Kerry v Galway will go up against Moscow match 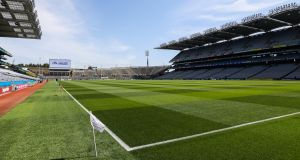 Dublin will play Donegal in the Super 8s at Croke park on Saturday, July 14th at 7.0pm. Photograph: Tommy Dickson/Inpho

Dublin’s opening game of the new Super 8 quarter-finals against Donegal in Group B has been confirmed for Croke Park on Saturday week, July 14th, at 7.0pm – thus avoiding a direct clash with the World Cup final, set for the Sunday at 4.0pm in Moscow’s Luzhniki Stadium.

It will be played as a double-header with one of the other opening phase one games (to be played at 5.0pm), that will be confirmed on Monday.

The opening Group A game against Kerry and Galway has also been confirmed for Croke Park on Sunday, July 15th, at 4.0pm. This is the game that will go up against the World Cup final, that will also be played as a double-header with one of the other opening phase one games (to be played at 2.0pm).

Elsewhere the Cork county board have now advertised for a new county chief executive to replace Frank Murphy, the 74-year-old who has held the position for the last 46 years and was there for the construction of Páirc Uí Chaoimh, which first opened in 1976.

Murphy had been due to leave the position as far back as 2009, but was then given a three-year extension in 2012 to oversee the new development, having been there when it first opened in 1976.

Last year, another one-year extension was granted, but it’s now agreed that Murphy will step down at the county Congress this December, where his successor will assume the role.