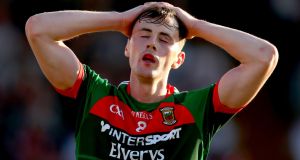 Mayo’s Diarmuid O’Connor reacts to a missed goal chance during the qualifier defeat to Kildare in Newbridge. Photograph: James Crombie/Inpho

July dawns and for the first time in eight years, being a Mayo football supporter means you’re looking backwards instead of forwards.

This Monday morning, with the sun grilling the land till we curl up at our edges, a long-forgotten normality must be settling over the county. At a stroke, the scaffolding around Mayo people’s summer has been dismantled. How are they to know what to do next?

No more tickets to chase. No more lifts to organise. No more Saturday night meet-ups to co-ordinate in Dublin pubs. There’ll be no date clash with a holiday now. No need to scout a location in Puerto Banus or Albufeira where they might put the match on for you. In London, Boston, Melbourne and the rest, all those work hours squirrelled away for a quick hop home at the end of the summer can be put to normal use.

They are, in sum, just like pretty much everyone else now. We forget sometimes that for the vast majority of GA followers, the sharp end of the summer is generally someone else’s concern.

Kerry, Dublin and Kilkenny have won 22 of the 34 All-Irelands since the turn of the century. In the last 25 years, only twice – in 1996 and 2001 – have the All-Ireland finals come and gone without at least one of that trio involved. The GAA belongs to everyone; September (and now August) belongs for the most part to a select few powerhouses.

Mayo are not a powerhouse. Kieran Donaghy threw out a telling line in Páirc Uí Chaoimh Saturday week ago after Kerry’s young team put Cork in the microwave and turned the setting up high.

“Kerry football never takes too much of a dip,” he said in the middle of an enthusiastic tribute to the fresh blood in their dressing-room.

It was offhand and there was nothing conceited in the way he said it, which in itself reveals a certain truth. There’s nobody in Mayo this morning talking that way. If they are, bravado is driving the wish father to the thought.

The point is, there is nothing in Mayo’s history that says they belong in the business-time weeks of the championship as a matter of course. And certainly not for seven years in a row.

Outside of the usual suspects, nobody belongs there. John Gunnigan of the Mayo GAA Blog put it best in these pages ahead of the 2016 championship. “The last years have just been incredible for Mayo,” he said. “I just cannot take people giving out that we should be doing better. Because this is not our natural habitat. A glorious splash every now and then before going into the doldrums again is more our thing.”

With a few exceptions, it’s everyone’s thing. Along with their facility for digging themselves into holes and making a holy show of getting out of them, that’s one of the reasons why Mayo have been so popular across the country since 2011. Other counties see more of themselves in Mayo’s struggles than they do in a Dublin/Kerry permanent government.

That’s why, if you’re from Dublin or Kerry, something about this whole Mayo thing has always irked you.

You hate the way the gobshites in the papers wax on and wax off about the great heart in this Mayo team. You roll your eyes at all the poetry they get written about them, how easily their failings are excused, the yearning you see in everyone else that they finally get to lift Sam. You deal in one currency only – winning All-Irelands. That is your blessing and your curse.

On one of those late September Sunday nights – can’t remember which year – we were hunkered down in a corner of a pub near Croke Park when a Mayo friend shrugged and declared the day, “Not the worst final defeat we’ve ever had”. When I mentioned that line to a Kerry friend a few days later, he was just confused by it. “What a strange way to think,” he said.

In the GAA, the dice are always loaded. By population, by money, by geography, by culture. We know that and we just about accept it but it’s all made a little more bearable by those occasional glorious splashes, regardless of who provides them. Mayo kept the summer going for plenty of GAA people who’d have only kept half an interest going after their own county disappeared.

That they weren’t good enough to win it despite all the chances they gave themselves is obviously not insignificant. Anyone idly picking up a record book/tablet/digital contact lens 50 years from now won’t be able to divine any sense of who they were or what they gave. They will guess that they must have been formidable without ever being good enough. And they will be right.

This isn’t the end of Mayo but it is an end. If and when they’re pitching at an All-Ireland again, they’ll have brought through another couple of quality forwards – nothing mad special, just someone who will take three or the four chances they get in a game.

On Saturday night’s evidence, Stephen Coen and Diarmuid O’Connor have the makings of a midfield pairing if given their head. The conveyor belt of wing-back/wing-forwards needs to keep rolling.

They’ll be back. As the Super 8s is likely to show, the field isn’t exactly bulging with world-beaters and Mayo will be nobody’s easy mark anytime soon. But if and when they slip back into the pack, it won’t be because they’re bottlers or overrated or any of the lexicon of names thrown at them in the shallow waters online. It’ll be simply because that’s what happens almost everywhere.