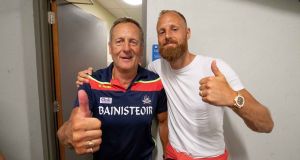 With the sort of father’s pride usually reserved for the son, David Meyler has spoken about the experience of watching Cork defend their Munster hurling title over Clare on Sunday.

His father John is the Cork hurling manager, and the Republic of Ireland midfielder, who last month signed a new two-year contract with Reading, was watching with that family interest at heart in Thurles on Sunday.

“Obviously I see the work and time he puts in to it and I am just thrilled for him,” he said. “I have always watched Munster championships since I was a child, even this year, I could see how close and tight all the games were. I am delighted not only for him but the whole team because I know quite a few of them.

“He comes and watches my training sessions, see if he can pick up anything that would help his hurling coaching. He puts in a lot of time and effort. So to see him involved in a team that wins the Munster championship in the new round-robin system is brilliant.

“And I love coming to hurling games. I think hurling is the best sport in the world. For me, the intensity, the speed of it, it is end to end. You look at Clare, eight points up just before half-time and you think, ‘Oh God, what is going to happen now?’ And then bang, bang, a goal and a point, we are back in the game.”

His father also continues to have an important advisory role in Meyler’s football career. “Obviously when there is training I speak to him every day . . . ‘How did you train?’ to see if he is happy with how things are going and he might talk of how he wants to be improve this or work on this. It is really only small talk.

“Whether they play Clare again we don’t know, same with Limerick or Waterford, you have to beat all them and then move on. Even now they were preparing for this final and now the All Ireland semi-final coming so they have to prepare for that. It is kind of non-stop and it is only now you have to find a place for that. So it is only after it is all said and done that you can take time to relax and that you can view it all.”

Meyler was straight back to pre-season training in Reading after the game.

“I am already back a week in pre-season, flew in to Dublin this morning for the game. It’s full-time. It was a day off and most people are well aware my father is coaching and they know I have a big interest. I came on my own time, I watched the game, obviously I knew a few of the lads so I came down and congratulated them.”

1 Connell losing touch with the club championship is the real tragedy of Normal People
2 Ghosts and goalposts: The soul of street football in Dublin’s Gloucester Diamond
3 Shane Ryan: Shark attacks and gruelling shifts on a Covid-free Atlantic mission
4 Coming fourth in the Olympics didn’t change this fearless quartet, time did
5 Sideline Cut: Vignette shows why Bird is the true shark in The Last Dance
Real news has value SUBSCRIBE