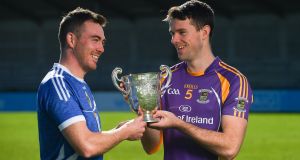 Sunday’s Dublin hurling final may not ultimately determine who gets to take over from Pat Gilroy as county manager but it may fast-track the process.

It is understood the Dublin County Board have narrowed down their list of candidates to three: former Dublin and Clare manager Anthony Daly, Cuala club manager Mattie Kenny, and former Galway manager Anthony Cunningham, who worked alongside Gilroy this season (before Gilroy’s sudden departure last month).

Observing with interest, and hoping to stand in his way regardless, is Simon Lambert, the club stalwart at Ballyboden St Enda’s who was also involved with the football side when then won the All-Ireland in 2016. Still only 29, Lambert hurled senior with Dublin during Daly’s previous term as manager, from 2009-2014, before being dropped in 2015, one year after Ger Cunningham took charge.

“Do I have any regrets?” asks Lambert, on that very issue of his sudden termination, then aged 27, having come back from a career-threatening injury in 2013, and missing all of 2014. “Maybe about what I said? Possibly so.

The question of whether he would like to work with Daly sounds a little moot, at least for now.

“Dublin’s a lot different from the set-up Dalo left. But whatever Dalo does, Dalo does. I’m sure he’d like to get back into county management, whether that’s with Clare or with Dublin. If he goes back with Dublin, all the best to him.”

When Gilroy took over this time last year, offering a clean slate and with ambitions of doing for Dublin hurling what he did for Dublin football, there was genuine excitement. Despite recalling several former panel members, Lambert wasn’t one of them.

“I’ll be honest, it hurt me. That was a year ago, I was 28, absolutely, you feel you’re coming to the peak of your career, you think you have something to give.

“If he wanted to go a different way about it, that’s fine. I would be a small bit envious of the lads and how good the set-up was this year and the continuity that they all had. They were unlucky with the couple of results they had.

“My club form has probably been indifferent over the last couple of years, I’d absolutely agree. But I still definitely did think last year I had something to offer, both on and off the pitch.”

Now that Ballyboden St Enda’s are back in the final, their first since 2013 and chasing a seventh title in all, Lambert has reason to see the possibilities again. With All-Ireland champions Cuala out of the way the chance is real.

“I’ll always keep the door open to playing with Dublin, no matter what age I am. I’ll just try to perform on Sunday and you never know, if it’s Dalo or Mattie or Anthony Cunningham. I’ll just look after myself on Sunday and see what happens.”