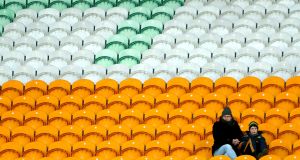 If Tipperary footballers beat Waterford in the Munster Football Championship, they are down to play Cork at 7pm on May 26th, and in Connacht the meeting of Roscommon and New York/Leitrim is set for 5.30pm

Leinster GAA officials are open to the possibility of rescheduling the throw-in times of upcoming matches to avoid a clash with the Champions League final.

Two Leinster championship matches are set for late in the day on Saturday, May 26th, the same evening as Liverpool take on Real Madrid in Kiev at 7.45pm. In a double-bill at O’Connor Park in Tullamore, Westmeath will play the winners of Laois and Wexford in football at 5pm, while in hurling Offaly will play Wexford in the third round of the new round-robin format at 7pm.

There is some precedent here in that the meeting between Offaly and Wexford in the 2011 Leinster Football Championship was moved to 5pm to avoid a clash with Manchester United against Barcelona in that year’s Champions League final.

“We have our fixtures made at present,” said Leinster GAA chairman Jim Bolger, “but we would be open to it if we thought it was going to help our supporters and fans, to accommodate them if it was going to have a significant impact on us. It’s not something we normally do even though there might be a precedent there.

“It’s something we haven’t thought about, but we may think about it, and we’ll see what happens.”

If Tipperary footballers beat Waterford in the Munster Football Championship, they’re also down to play Cork at 7pm in Thurles on the evening of May 26th, and in Connacht the meeting of Roscommon and New York/Leitrim is set for 5.30pm.

Bolger suggested those throw-in times in Leinster were open to some manoeuvre. “We may have a look at it. We’ll talk to the counties involved and see what the story is. If they come talking to us we’ll listen to them.

“Tullamore is a market town. Saturday is the busiest day, so we have to be mindful of parking in there, and try to be as least disruptive as possible. We’ll do that in liaison with the Garda and event management, the local event management in O’Connor Park, so we’ll have pre-event meetings, as ever, to put in structures that are appropriate for the particular crowd and attendance, and that may have an impact on it as well.

“Then there’s other attractions or distractions, we have to factor those in be it whatever events are on locally, but even something as simple as a sponsored cycle could impact on us, and that’s why we have to have good relations with the Garda and the local event management committee. That’s how we work those out.

Any decision to alter the throw-in times will be a matter for the Leinster Council.

“We have a council meeting later on in the month, but we’ll see what comes in correspondence-wise from the counties that are concerned, number one, and, number two, we could convene a meeting if need be as a result of that, because we have overall responsibility for the management of all our championship games within the province.

“We’d liaise with Croke Park as well, ensure that we accommodate the fan base and that’s what we’re doing this year as well. We don’t want to be clashing with ourselves above all.”

It was also confirmed that the twice deferred O’Byrne Cup final between Westmeath and Meath will be played at TEG Cusack Park in Mullingar on Sunday week, May 13th, at 3pm.