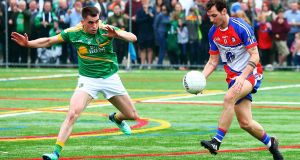 It was nearly the Fairytale of New York but a last-gasp charge by a determined Leitrim side downed a heroic display by New York. Noel Plunkett, in the dying seconds of the second half of extra time, sliced right through the New York backline before putting over the decisive point.

It was the lowest of moments for the home side and its supporters as Gaelic Park was abuzz from well before the opening throw in. Many a person through the gates had the same thing on their mind – this is New York’s best chance ever.

Keith Beirne got Leitrim on the board first with a opening minute score, but that would be all for Brendan Guckian’s men for quite a while. If Gaelic Park had a roof over its head it would’ve erupted a minute later when the hometown kid Shane Hogan dispatched a goal.

Former Armagh intercounty star Jamie Clarke gathered the ball to the right of the posts before passing off to the Bronx born and raised Hogan who neatly slipped the ball past keeper Diarmuid McKiernan.

Two minutes later New York’s other midfielder David Culhane put the home side up 1-1 to 0-1. By the fifth minute, New York were really causing a bit of bother to the Leitrim backs as they had no answer for the darting north/south runs of Kevin O’Grady, Tony Donnelly, Jamie Clarke and the rest of the New York forwards.

Clarke would score his first point of the match in the fifth minute before adding a second five minutes later after O’Grady put over his first in the eighth minute. By the 12th minute, Leitrim had done well to push back but a half chance at goal was superbly blocked down by New York captain Tom Cunniffe.

At 1-4 to 0-1 Leitrim needed a level head to settle things down and ironically it came in the form of Emlyn Mulligan, who less than six months ago was helping Donegal NYC to a New York Senior Championship. Mulligan gathered the ball just past midfield and superbly sent over Leitrim’s second point of the match.

Knowing he needed to somehow take back the midfield, Brendan Guckian inserted Dean McGovern into the game – replacing Domhnall Flynn. McGovern made an immediate impact – plucking the first ball that came his way out of the air.

Gradually Leitrim worked their way back into the game, and by half time they had managed to take the lead, 0-9 to 1-5.

The game in the second half continued at a furious pace, and the gap between the teams never went to more than two points. Extra time appeared inevitable. New York might have made history with a late score from Clarke, but his effort dropped short and we were all set for extra time.

Leitrim were on top in the first additional period but were wasteful, kicking four wides while New York kicked two points, through Clarke and O’Grady.

They stretched their lead to three in the second period of extra time but from there Leitrim clawed their way back into the game, kicking the last four points of the match before Plunkett delivered the late last-gasp winner.

“Absolutely gutted,” said former player Pat Donohue on RTÉ Sport. “If there was ever a day that New York were going to take it and go to the championship, today was that day.”