Corofin and Ballyhale frank their greatness at headquarters 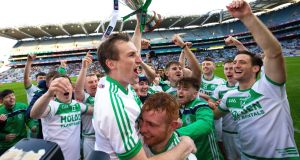 Change the dates, change the opposition, it makes no odds. Ballyhale and Corofin remain what they are, the dominant club teams in their respective codes, not untouchable exactly but still unbeaten.

Both sides had to work for it in the first ever January club finals date but in front of a crowd of 25,930, both of them came through in the end.

Ballyhale were pushed all the way by Tipperary side Borris-Ileigh before ultimately coming out with an 0-18 to 0-15 win. This is their seventh title and the first time they’ve put two back-to-back. For a team touched by tragedy, including the road deaths of two of their panel over the past two years, the achievement had a poignant touch to it.

“That was something we didn’t speak about until we got close to the match and we did want to do it, we really wanted to do it, because I think it’s a great sign of the team,” said coach Henry Shefflin afterwards.

“I think as joyous as an occasion as it is today, it’s a very sad day as well. There’s no doubt about it, to do back-to-back you have to have serious desire and want.

“I think Eugene’s Aylward passing last year has given them that want and desire. They wanted to do something special and have that jersey with them. We had a photo inside last year of Eoin’s [Doyle’s] ) jersey.

“As some of ye might be aware, Eugene’s jersey, number 19, wasn’t seen all year, but it was inside with them in the dressing-room. We got a picture with that jersey and the cup and I think that’s a great reflection of what the lads wanted to achieve today.”

In the football decider, Corofin were pushed even further by underdogs Kilcoo, needing extra-time to see out a 1-12 to 0-7 victory. Conor Cunningham’s goal just before the break in extra-time was the killer score, making Corofin the first team in the history of the club championships to do a three-in-a-row.

“I think the way we won that final is as sweet as any of the other victories we had over the last two years,” said manager Kevin O’Brien afterwards.

“The lads showed, and a lot of the lads in Galway know this, that they can grind out results no matter what way you try to play against us. I think that is fantastic. I’ve probably said this, our panel has been key.

“The lads coming in were absolutely fantastic. I knew going into extra-time that we had that panel and they had that experience. It told and full credit to them all, I hope they get their rewards for it now.

“All the effort is put in by people all over the club, in schools and everything, this is probably just reward. To do something special that no other club has done, I think it’s fantastic.

“It’s a great day as well for our families, they allow us to do so much and go off on a Tuesday night and Friday night. You go out the door, once you hop in the car, you’re thinking about training. Without that support we wouldn’t be able to achieve it. I think it’s fantastic.”