GAA referees instructed to crack down on head-high tackles 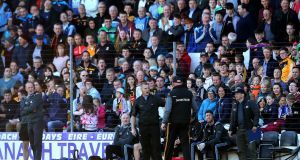 The GAA’s National Referees Committee has issued a fresh set of guidelines and instructions to all intercounty referees in an effort to stamp out head-high and dangerous tackles in both football and hurling.

At a presentation in Croke Park, it was made clear that referees will be paying greater attention to the high tackle and the “illegal charge/collision”, which under rule can result in a straight red card.

The presentation also included changes additional changes to the GAA calendar and “finishing on the day” criteria, introduced since Congress back in February, outlined by Pat Doherty and Bernard Smith of the National Referees Committee.

According to the new guidelines, the sanctions relating to illegal charge/collision will be determined by the following criteria: if contact is made to opponent’s head; if opponent has no opportunity to protect himself; if contact/impact is excessive or causes injury; if the elbow/forearm/hurley is part of the contact; if the player making contact jumps or has two feet off the ground; if the player making contact had a realistic alternative by way of challenging opponent; the direction and distance covered by the player who makes contact.

There is also an instruction to help ensure players take responsibility for their behaviour. This includes the following criteria: ball must be the primary focus; players are responsible for the contact they make; player must have an awareness and duty of care towards their opponent; player playing the ball will be protected.

In addition there was an outline of what is considered the principles of fair play. These include: reward the skilful player; ensure that it does not pay to foul; eradicate cynicism from the games; ensure consistent application of the playing rules; optimise respect for match officials; ensure players take responsibility for their behaviour; ensure sanctions are imposed on a proportionate and transparent basis. It was also made clear the throwing of the hurley at an opponent will no longer be tolerated.

On playing administration, it was agreed at Congress that counties are now required to present three copies of their team sheet to the referee no later than 40 minutes before throw-in.

In terms of discipline, once the purposed penalty is sent out, a player/team official has 52 hours to accept a hearing.

Extra-time shall remain obligatory in the event of a draw in the following competitions: intercounty All-Ireland and provincial senior championship games with the exceptions of: All-Ireland finals (Sam Maguire and Liam MacCarthy Cups only) and the provincial finals, in which Replays shall apply, and round robin group games, in which the provision as in Rule 6.21(4)(a) shall apply (ie one “table point” credited to each team).

Last October the GAA announced a new Referee Development Plan, a key part of the GAA’s own Strategic Plan 2018-2021, with the aspiration “to recruit, develop and inspire referees to reach their full potential and officiate at the highest level, and control our games, uniformly and consistently, in accordance with the playing rules”.

Meanwhile Dublin hurling selector Greg Kennedy has accepted a proposed four-week suspension by the Central Competitions Control Committee following the incident in Saturday’s Leinster hurling round-robin game against Kilkenny, when he intercepted a free being taken by TJ Reid.

Kennedy, himself a former Galway defender, was involved in the incident in the in the 33rd minute: Reid’s quickly-taken free was cleanly intercepted and caught by Kennedy, on the field as the team runner.

Reid was attempting to line up a goal chance, given Kilkenny were about to head into the break four points down: after Kennedy’s interception, match referee Cathal McAllister demanded the retake, which Reid did convert, only after Cody had told Kennedy exactly what he thought of the interception when returning to the sideline.

“It was bizarre, completely bizarre, an unbelievable thing to see,” Cody said of the incident. “Obviously TJ spotted Wally (Walter Walsh), a goal opportunity, which was on, definitely, and would have meant a huge amount to the team at that stage.

“It was inexplicable, really, that he (Kennedy) decides to catch the ball. It was certainly unprecedented. So I wasn’t happy about it, no I wasn’t.”