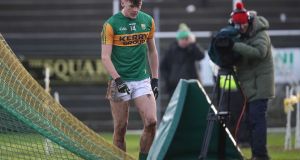 The controversy caused by David Clifford’s red card in Edendork highlighted long-standing problems for referees: dealing with situations that arise when their attention is elsewhere, forcing them to rely on the advice of umpires, and determining who is responsible for a scuffle between two players.

In the Tyrone-Kerry league match at Edendork, Clifford was seen being wrestled to the ground by opposition substitute Ben McDonnell, who is on camera taking the Kerry captain in a headlock.

After consultation, Longford referee Fergal Kelly showed both players a yellow card, which in Cliford’s case was a second and entailed his dismissal in the 66th minute, which when combined with eight minutes injury time meant that Kerry were without their top forward for 12 minutes.

The sending-off provoked strong reactions in the media with RTÉ analyst and former Dublin All Star Ciarán Whelan criticising on television the situations in which these events arise.

“He’s the key player and he gets dragged to the ground and picks up a yellow card and you can see how frustrated, how annoyed he is. It’s been a bugbear of mine for a couple of years that when the key players are targets, they get sucked in and get a silly yellow card.”

Too often what appears to happen is that regardless of who started the brawling, that both players are shown yellow cards – on the basis that retaliation is no defence against sanction. In the footage shown on television, however, Clifford doesn’t fight back and clearly raises his hands to indicate as much.

There is an argument that if the GAA want to tighten up on these incidents that the black card should be deployed to remove the player, who was first to provoke the situation.

Rule 5.14: “To threaten or to use abusive or provocative language or gestures to an opponent or teammate.”

That would place a heavier burden on the transgressor than at present.

The controversy overshadowed what was a significant win for Tyrone after the match had been moved from Omagh to Edendork, home club of coincidentally the county’s two free takers at the weekend, goalkeeper Niall Morgan and Darren McCurry, who has been having a great season to date, averaging 0-6 per match.

Between them they scored 0-10 on Sunday.

“The arrangement is that Niall hits the long range frees and I’ll hit the ones closer to goals,” said McCurry afterwards. “You saw Niall in the first half and those ones against the breeze from far out were unbelievable. I couldn’t hit it that far. We’ve a great relationship hitting frees with the club. You can see how good he is.

“I’ve probably hit 100s of thousands of shots into these goals. I’ve been up here all my life, my home house is just over the road and I’ve been coming up since I was no age. It’s just great to get over the line today and to play a match here in Edendork is just unbelievable.