GAA insist time keeping is not a major issue in games

No plans for review despite accusations of inconsistency by Meath boss 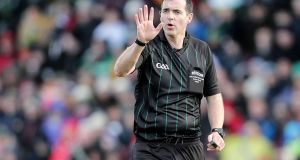 Sean Hurson: the Tyrone referee was criticised by Meath’s manager for not playing more additional time at the end of the game against Mayo at Páirc Tailteann. Photograph: Laszlo Geczo/Inpho

The GAA have no plans to review time keeping procedures after criticism from Meath manager Andy McEntee of the lack of added time played in his team’s narrow defeat by Mayo in Navan.

Feargal McGill, the GAA’s Head of Games Administration, said that he was happy with the standard of time keeping, which was overhauled a few years ago in order to address time wasting. As a result, matches frequently run up to the 76th and 77th minutes.

“I have to say that I think there’s a high standard of consistency at the moment from our officials in how they apply the rules on time. We have minimum allowances for substitutions and regulations that were introduced at the start of 2016 to ensure that adequate additional time was being played.

“I don’t think you have the situation where people are walking away from matches every week complaining about the amount of time being played or not played.

“There have been high-profile incidents recently of referees playing way over the announced time – the Kilcoo game [All-Ireland club football final against Corofin] and the Dublin game [last Saturday] and if you look at both of those games you’d see that the referee got it right.”

McEntee’s unhappiness was made clear to print, digital and broadcast media after the match when he contrasted how his team had been granted no additional time beyond the announced four minutes with Dublin’s experience on Saturday night. Both he and his players seemed to anticipate a further opportunity to equalise after Thomas Reilly had cut the deficit to a point.

“I can’t believe – the amount of breaks that were there in those four minutes of extra-time and we don’t play two seconds of extra-time? Dublin got two minutes last night [Saturday] to get an equalising score. There’s a level of inconsistency all over the place. And they want referees to get respect. They’ve got to show a little bit too.

He referred to an incident in which Mayo replacement Bryan Walsh had been down injured during additional time.

“He’s supposed to play on . . .” he said of Tyrone referee Seán Hurson. “I mean if that guy is lying down on the ground for 30 seconds holding his head – 30 seconds, you get two scores in 30 seconds”

The Meath manager had grounds for grievance in that instance. Four minutes were announced as injury-time but whereas the injury stopped play for 35 seconds, the clock stopped at four minutes 10 seconds after O’Reilly’s score.

Down referee Ciarán Branagan added three minutes to the announced six at Croke Park on Saturday, enabling Dublin to close a six-point deficit by the 79th minute. Most observers accept that the match had been held up for that amount of time, as the referee administered some cards, injuries were treated and replacements took to the field.

McGill contends however that referees are far more aware of the need to address deliberate time wasting.

Seven years ago, a motion to congress was successful in introducing the countdown clock familiar from women’s football. But after trialling the idea in third-level college’s fixtures, the GAA decided not to proceed after identifying what were seen as shortcomings in the system.

As a result, the 2013 amendment was deleted at a subsequent Congress.

The misgivings about the time-keeping system that has proved successful in the women’s game were based on reputational damage to the association, according to the report presented to Central Council:

“As part of the two trials of the clock/hooter system conducted, a number of concerns were raised by those who witnessed the trials in action with regard to the impact the introduction of the clock and hooter might have on the playing of our games.

“These included operating officials, referees, players, mentors and spectators. These concerns – along with the suggested protocol for implementation – were also presented to Central Council delegates. In the main, the concerns centred on potential damage to the reputation of association:

These included human error or failure to operate it properly, system failure, prevalence of ‘fouling down’ the clock, the playing of ‘keep ball’ when the clock was in view and deliberate concession of possession in order to make the ball go dead.”

There are no plans to revisit the idea.