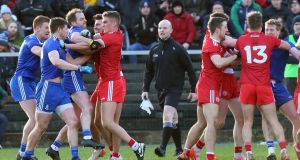 In Castleblayney, the locals delighted themselves in making jokes about Tyrone losing their first game in Europe. On an afternoon of oddly one-way traffic, their tendency to throw in an occasional league stinker ran slap bang into a Monaghan side that was brim-full of go and guts from the off. It led to the pre-match odds getting routed in a game where the home side took the lead in the third minute and were never caught.

Tyrone have had hapless afternoons in the spring plenty of times before and gone on to have perfectly passable summers. But it must be disconcerting for them that they weren’t so much beaten here as lapped, sitting a mile off the pace and never threatening to make up the ground.

One thing is obvious – unless and until they clear up the Cathal McShane situation, Tyrone are in a holding pattern. Their attack had no focal point here and it meant that their build-up play was ponderous and aimless for too much of the time. They weren’t directing long ball into the forward line but neither were they constructing moves off shoulders to any great extent.

Mickey Harte couldn’t illuminate us any further afterwards as to whether he’d have last year’s top scorer around but he cut a pretty fatalistic figure when the subject came up. “I always said I wouldn’t give up hope until I was sure that he had signed an alternative arrangement. I’m not sure that that has happened right yet, but I know that it’s on the agenda.

“We have played two games, we’ve won one and we’ve lost one. We didn’t play to our best any of the two days, but I think that you have to take each season as it comes, and you have to take the personnel at your disposal any time it comes. It’s not just about Cathal McShane, we’d love to have him of course, and he’s gone. But Mattie Donnelly is injured at the minute, Paudie Hampsey is injured at the minute, who were very strong first team players.”

None of which will concern Seamus McEnaney. It took Banty six years to beat Tyrone during his first spell with Monaghan, eventually sneaking a one-point win during the 2010 league. This was a far more comfortable affair, with Conor McCarthy in rampant form in attack and Niall Kearns and Dermot Malone showing huge mettle around the middle. Maybe the most satisfying thing for Monaghan was winning well in a game where Conor McManus was never particularly a factor.

“I think it was a controlled performance by Monaghan,” McEnaney said. “Quite happy with how we applied our gameplan and how the lads put in the work ethic. I would be disappointed with the last seven or eight minutes. We lost Kieran Hughes to a red card and will have to head to Croke Park without him next weekend.

“Tyrone, as we have known down through the years, they are tricky opposition to play against. You need to be in control of what you are doing and our lads were doing that and were quite happy with that. We went in at half time reasonably happy. The point before half time could have been avoided but other than that, I think the goal was a crucial score in the game.”

Monaghan were on it from the start here. They were clever in attack, full of width and support and angular running lines. Kearns and full-back Conor Boyle both made emphatic and well-timed incisions to take fine points and with a bit more care and attention, they’d have gone in at the break further ahead than the 0-7 to 0-6 scoreline.

The game-breaking goal came on 44 minutes. Malone, exceptional all day, dived full-length to break up a Tyrone attack and Monaghan sprang into counter-attack mode from the turnover. Boyle sallied forward and drove at the heart of the Tyrone defence, drawing the cover and sending Karl O’Connell in behind it. Though O’Connell didn’t gather first time, his toe-poke finish beat Niall Morgan into the bottom corner.

Monaghan were never in danger after that. McCarthy whipped three points from play and rising star Aaron Mulligan came off the bench to drill one of his own. Tyrone took the bad look off the scoreboard near the end but apart from injury-time red cards for Kieran Hughes, Mark Bradley and Kieran Duffy, there was nothing to see here from a long way out.