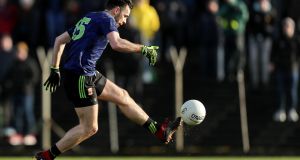 Meath’s wait for a first win in Division One goes on – despite a helter-skelter finish in Páirc Tailteann that originally looked as if they had pulled it out of the fire. Instead it culminated in narrow defeat, as Mayo conjured a late 1-2 to save a match they appeared for a long time to be comfortably controlling.

Deliverance came for the visitors from a familiar source. Replacement Kevin McLoughlin – whose late score saved Mayo from relegation two years ago – came up with a 70th-minute goal after Meath corner back Robin Clarke got isolated and was dispossessed by Ryan O’Donoghue and supplied McLoughlin for the crucial score.

The player’s introduction turned out to be a tactical coup for manager James Horan, who calculated that the experience and versatility of the player might be a better bet playing into a strong wind after the break. McLoughlin rewarded him with team’s entire second-half output.

On a day in Navan that could have doubled as a commercial for all-weather paint, as it switched from storm lashed to bright sunshine, an exciting match also swung as hard as the most volatile constituencies in the world outside.

Having made virtually no impact on the scoreboard for the first three quarters of the match – by the 49th minute they still trailed by the half-time deficit of 0-1 to 0-7 – Meath broke through for a goal.

Donal Keogan, who had made some excellent runs from wing back where his defensive plays, including three blocks, were also important, finally made it count by providing the link in a 1-2 for James McEntee to palm into the net. Brian McMahon’s free cut the margin further and then the same player provided the link for Brian Conlon to set up Ronan Jones for a big finish and – unbelievably – the lead, 2-2 to 0-7.

Meath now looked likely winners, unrecognisable as they moved forward with confidence and purpose, prompting Horan to reflect afterwards on the high-wire nature of the win.

“Two points under those conditions away from home against a team that was hurting and gave everything to it and considering then where we were with 10/12 minutes to go. The crowd behind them, wind behind them, they were winning the breaks and we still dug it out,” said Horan.

It was heart breaking for Meath, who went into this under mounting pressure to disrupt the assumption that they were on a quick return ticket out of the top flight. Ultimately they took too long to get going and by the end had fired 15 wides.

Manager Andy McEntee was outspoken afterwards about the amount of injury-time played, as his side pushed for an equaliser. Thomas O’Reilly’s 74th-minute free had cut the margin to a point when referee Seán Hurson blew the whistle more or less on the stroke of the announced four minutes of injury-time.

“I can’t believe the amount of breaks that were there in those four minutes of extra-time and we don’t play two seconds of extra-time? Dublin got two minutes last night [Saturday] to get an equalising score. There’s a level of inconsistency all over the place. And they want referees to get respect. They’ve got to show a little bit too.

The excesses of the weather meant that the hospital end goal in Navan had the equivalent of a safety curtain in front of it, leading to some extraordinary misses into the wind.

An early Meath chance of a goal, which in the circumstances would have been invaluable, in the 15th minute was blocked after Cillian O’Sullivan had smuggled wing back Brian Conlon in behind the defence. If that owed nothing to the wind, a variety of shots for points, which billowed wide, certainly did and all the while Mayo slowly built a score.

They pushed up tight on Marcus Brennan’s kick-outs and even on the goalkeeper himself, who at one stage was coursed all over his full-back line as he tried to get rid of the ball.

Mayo moved the ball well, effectively harnessing the win. Aidan O’Shea rotated around the attack as James Carr and Tommy Conroy sniped in the spaces and Fergal Boland kicked a couple of good points.

They were fully deserving of the six-point lead at the break. The early stages of the second half didn’t suggest any respite for Meath. Mayo were finding it impossible to score into the breeze but the home side were shooting wildly at the other end until they looked as if they’d hit their stride.

He was non-committal but it didn’t take a mind reader to fear the worst.

“He’s working with the medical team at the moment. He’s got a bad knee injury. I haven’t got confirmation of it yet.”

Wallabies fall short as they draw with Argentina in the rain 11:38
Emiliano Grillo storms into the lead in Mexico 08:36
Jim McGuinness: Cavan need illogical courage and variety to down the Dubs 07:00
Ireland retirement was ‘hardest decision’ for David McGoldrick 06:30
Matt Williams: Scrum stoppages turning rugby into a boring spectacle 06:30
Crossword Get access to over 6,000 interactive crosswords