Armagh slowly closing in on another shot at the big time 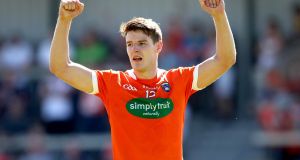 In Armagh’s brief but memorable reign as the supreme team in Gaelic football, it became popular to portray Kieran McGeeney, their totemic driving force, as singularly driven and, consequently, lacking in humour.

In fact, the Mullaghbawn man has always had one of the more mordant wits in the GAA cast if you listen closely enough. He keeps a conspicuously low profile since he became Armagh manager but he showed up at a live event hosted by Colm Parkinson during last September’s All-Ireland weekend, at which he was seated next to his old nemesis Seán Cavanagh.

The pair – to Parkinson’s evident delight – were slightly uncomfortable with the civility and bonhomie of the setting and Cavanagh broke the ice by reminding McGeeney of the time he had tried to get him sent off.

McGeeney, mystified, enquired if that was the All-Ireland semi-final of 2005 and Cavanagh insisted that, no, it had been another game. There followed a moment of awkward silence in which the protagonists seemed to recall the visceral enmity that had informed their relationship and which finally prompted from McGeeney the perfect observation: “So many memories.”

If someone writes a book on Armagh-Tyrone: The Hating Years, McGeeney’s summary could provide the title. The latter half of McGeeney’s playing career was spent playing number six on vivid orange teams whose force of nature – and pure force – defined championship summers.

This year, he has guided Armagh to the brink of the inaugural Super 8s almost unnoticed. The Kildare-Mayo saga understandably sucked up much or the oxygen – and a good deal of Ireland’s water reserves – last weekend. Up in Armagh though, another team experienced a significant turn in the road.

“The whole thing about the Athletics Grounds was that it was always this cauldron of noise” says Jimmy Smyth, the former Armagh player.

“And the game the other day seemed to follow a pattern that we have seen recently whereby Armagh would get a lot of possession but were putting the wrong kind of ball in on that hard ground. And by contrast Clare were playing a lovely measured pass. There were no sweepers or packed defences so both sides could pick out passes fairly easily but Clare in particular took some lovely scores.

“I was texting my daughter: she is an Armagh fanatic but she is up in Donegal. And I was texting my wife at the same time about how the game was going. After the Clare penalty, you were saying well that’s that. And then out of the blue came this 1-4 for Armagh. And all the points that hadn’t gone over before – and there had been some bad shooting – suddenly went over.

“This boy afterwards was talking about the sound of the crowd. And it was the first time he had experienced that real Armagh support. Relief would have been one thing. But it reminded me of the Armagh-Fermanagh replay in ’93 when Denis Holywood scored two goals. There were people who had left the ground before Armagh turned it around.”

It was something that McGeeney alluded to in his interview afterwards, wryly noting that “a wee bit of faith in these boys would go a long way”.

When McGeeney was appointed to the Armagh post in 2013, he must have known that the teams he managed would always be judged against the formidable side from 1999-2005 which he personified. The All-Ireland title of 2002, beating Kerry in the final, was the high point.

But they brushed against the enormity of becoming 3-in-a-row team; they were a kick of a ball from beating Tyrone in the 2003 final and were arguably the strongest team in the country when they were blindsided by Fermanagh in one of the great championship upsets in the 2004 All-Ireland quarter-final.

Whatever about the might-have-beens, Armagh football supporters dined richly from 1999-2008.

He could have added Croke Park to that list. The Ulster finals of 2004, ’05 and ’06 were moved to headquarters to accommodate the demands for tickets. Armagh won all three. It all stopped suddenly. Armagh last featured in an Ulster final in 2008, when they beat Fermanagh after a replay.

Their provincial record under McGeeney has been inconsistent, with the latest setback occurring against Fermanagh in the first round of the championship. A 0-7 scoring total signalled an engine that had stalled. Because McGeeney was such a formidable force of personality as a player, he has attracted intense scrutiny as a coach. The-12 week suspension he was given after a verbal exchange with Joe McQuillan, who was linesman in Armagh’s 2017 league game against Antrim, became one of the sagas of that season. (In an interesting twist, McQuillan will referee this Saturday’s qualifying tie).

Armagh recovered from their Ulster championship disappointment against Down last year to produce a string of good performances against Westmeath, Tipperary and McGeeney’s former team, Kildare. They made it to the last eight, where they were torn apart by Tyrone in Croke Park, a defeat which rankled the generation of Armagh supporters raised on the idea of the counties as perpetual rivals.

“It was only the people there previously who knew this was an aberration,” Smyth says of that time.

“You have to be realistic. Armagh is a small county. We have some good players and the U-20 team is promising. But this year we have a number of absentees and a terrible injury list.”

Inevitably, their Ulster exit drew critical attention from inside and outside the county. After Saturday’s win, Jemar Hall, who made his senior debut in Armagh’s qualifying win over Westmeath, made it clear that the words directed at the players that evening have not been forgotten.

Through the spring, both of those teams had set the standard in Division Three of the league . In the divisional final the score had finished 1-16 to 0-17, with Armagh lifting their first trophy of the year. It was a heartening response to a season in which Jamie Clarke’s wanderlust took hold again, depriving the county – and the game – of one of its most instinctive attacking talents.

Stefan Campbell and James Morgan were among eight other significant players to opt out of the panel. Ethan Rafferty’s knee injury in March further depleted the experience within the panel. Armagh’s qualifying run has not been particularly taxing: it was not that surprising that they beat Westmeath, Sligo and Clare.

But they posted 3-16 away from home in their first win, 1-19 in Markievicz Park and 2-16 in that late comeback against Clare. And it has been a commendable response to that low moment in early summer. It was only after Fermanagh ousted Monaghan that the meanness of the Ernemen’s defensive system became fully evident.

The response to that setback – the defiance – leaves Armagh and McGeeney with a chance to creep into the Super 8s when they face Roscommon in Portlaoise today. Few thought of Armagh as Super 8 contenders before the championship started. Now they are just 70 minutes away.

“It would be unbelievable. Whether they would be glad of it at the end of it is a different thing. If you ask me where Armagh are at, they are definitely a Division Two team in terms of national league. They were too good for Division Three. But if you were to get the players Armagh are missing back, there is a huge amount of scoring potential among those boys. They won’t be here this summer. But if Armagh were to beat Roscommon it would be a huge victory from where they were in Fermanagh that evening,” said Smyth.

Maybe the earth doesn’t tremble when Armagh walk these days. But for now, it’s enough that they are still walking.

1 10-man Arsenal show their heart to rescue a point at Chelsea
2 Gerry Thornley: Saracens very late to apologise for repeated cheating
3 Mourinho insists there is no problem between him and Danny Rose
4 Felix Jones expects De Allende and Snyman to boost Munster
5 Champions Cup final: How to get there, how to get tickets and more
Real news has value SUBSCRIBE