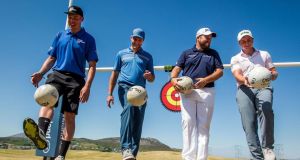 Kieran Donaghy, Michael Murphy, Shane Lowry and Paul Dunne at the GAA Challenge ahead of the 2018 Irish Open at Ballyliffin. Photo: Oisin Keniry/Inpho

Donegal captain Michael Murphy – and the rest of the players – are determined to focus on the job of playing rather than getting involved in any boardroom games or rules queries relating to how Dublin are able to play two games at Croke Park in the upcoming Super 8s phase of the All-Ireland championship.

Although the Donegal County Board has requested a meeting with the GAA on the matter, Murphy claimed the players only have playing Dublin on their minds: “We are playing in Croke Park at seven o’clock on Saturday (week) and that’s what we will be looking forward to. We have prepared very well since the Ulster Final. I know the county board and management released something but as a group of players we have to stay away, we can’t get too bogged up or too bogged down in it.

“Croke Park is set out in stone; we’ve (always) known the first (phase) games are going to be Croke Park games.”

In fact, Murphy said there had been no discussion on the matter by the players when the panel trained on Tuesday night.

Donegal County Board has sought a meeting with GAA officials to clarify the issue of how a team can use the same ground as a home ground and a “neutral” venue. “The intention of the meeting is to ensure a level playing field for every team who will qualify for the All-Ireland Quarter-Final Group Stage and ensure no team has any advantage over any other team,” said the statement.

However, the relevant rule – 6.28 (a) 1110 – which was passed at GAA Congress in spring 2017 doesn’t actually include any reference to neutral venues.

“They’re not trying to query the first game, it is for what comes after. The first game as far as I am aware is a Croke Park fixture so that’s where we are going to be as players and then we have a home game after, it is the third game they’re trying to query,” said Murphy.

He added: “Like anything that’s new, there is always improvements can be made to it. The hurling ran off, it was fantastic, close games, brilliant venues, huge crowds, so the Super 8s can run off well too ..... the first group of games are Croke Park games, that’s set in stone at congress where everyone has been at, it is just the games thereafter (that need clarification).

That Donegal-Dublin match – between provincial champions – is a Phase One match set for Croke Park on July 14th with a 7pm throw-in.

“(Dublin are) a phenomenal side, they are up there probably with the best side that has played the game. It is going to be a huge task for us, we have a new team, a young team, and a lot of the younger boys and some of us older boys are buzzing after the Ulster final and it is one game yes against Dublin, we are going to be going into it with all our might, but you have to look at it and separate it as a three part series with three big games coming up. I’m looking forward to getting stuck into it.”