GAA Statistics: How intercounty teams are coping with the heatwave

Clare, Monaghan and Galway provide an insight into the preparation required 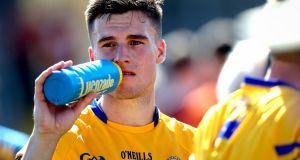 A dejected Jamie Malone rehydrates after his side’s All-Ireland qualifier Round 3 defeat to Armagh at the Athletic Grounds, Co Armagh. Photograph: Inpho

The highest June temperature recorded in Ireland since 1976 was last Thursday in Shannon, Co Clare.

Four days before that 32 degree high, the county’s football team were playing Offaly in the qualifiers, and three days later they were edged by a late Armagh comeback – falling just shy of the last 12 in the Championship. With temperatures consistently above the mid-20s in the build-up to and during both matches (and set to remain at such for at least the remainder of this week), what alterations did Colm Collins’s team make to deal with the heat?

Against Armagh on Saturday, with the temperature rising to 29 degrees, the Clare footballers registered weight losses ranging from 1.7kg to 2.8kg. One of the players tested dropped in weight from 85kg to 82.9 kg, while another went from 92kg to 89.5kg.

The team’s average calories burned was 1,573, with one midfielder burning 2,085 calories and an inside forward burning 1,145. An average man needs to eat around 2,500 calories just to maintain his weight, before calories burned from exercise are even calculated.

In preparation for their All-Ireland Round 3 qualifier defeat to Armagh on Saturday, Collins says that the logistics team “would have doubled up on the normal amount of water we were bringing to the match. We brought cold towels, a change of jerseys. There were constant reminders on the WhatsApp group about hydrating and we decreased the training loads and shortened the sessions.”

During a light training session in the build up to the Offaly match, in 23 degrees heat, the team’s average calories burned was 804, with one player burning 1140. While the weight loss recorded during the session ranged from 0.7kg to 1.2 kg.

Rob Mulcahy, Clare’s strength and conditioning coach explains that much of the weight loss he records prior to and after training and matches, is fluid loss. And therefore to distinguish what’s been lost through fluids and what is actual weight loss, players often have to weigh themselves again the following morning.

“The players I would be most concerned with are the lighter and heavier lads,” explains Mulcahy, who was formerly the Limerick hurling academy strength and conditioning coach. “The lighter lads, I don’t want them losing any more weight. And some lads wouldn’t be great at hydrating, so we’ve to watch them. And others suffer from heat stroke, or might be out working in the sun all day. One lad is a bricklayer for example. So weighing the players can be very time consuming but we pay extra attention to those lads.

“It can be a very fine science, but in an environment with a large squad on a matchday the best approach is often to just get as much [fluids] as possible into them. It’s something [the weather] I've had to really factor in and had to sit down with our medical expert to make out a plan, because you can clearly see the effect it can have on lads' energy levels.”

Mulcahy explains that urine samples are taken by the team nutritionist before training and certain players are flagged that need monitoring, or that sometimes are made unavailable to train.

Among the measures taken for last weekend’s match against Armagh, was that every player was to “arrive at training hydrated during the heat, taking four to six glasses every hour. Every player was given a two litre bottle on the bus to Armagh the day before the match, another when arriving at the hotel, and another on the morning of the match.

“During the warm up players were constantly encouraged to drink during drills. Cool face cloths were kept in an ice cooler for the players to cool their faces before the game and again at half-time. Most players have Vaseline over their eyes to stop sweat going into their eyes so the face towel is a better alternative than covering their heads in water. And their jerseys were changed at the half also. Isotonic drinks, and dioralyte were also given to the players to replenish electrolytes lost.”

While dehydration precautions are taken by all of the county teams playing and training during the current heatwave, the approach varies from team to team. Kildare for example actually monitor their players’ water intake by tracking their individual water bottles during sessions. Ultimately though, it comes down to the player’s own discipline to follow the expert advice on hand.

The Galway hurlers' All Star centre back Gearóid McInerney says he can lose up to 3kg during matches and training, but his aim is to keep fluid loss below 1.5kg. He carried all 100kg of himself, plus his helmet, around Croke Park for the full 70 minutes in Galway’s Leinster final draw with Kilkenny last Sunday, and he’ll go again this weekend. It’s no coincidence that, regardless of the conditions, he’s still excelling.

“As soon as you wake up you need to get water in because you sweat at night,” the Oranmore native explains. “Especially in this weather. So I have bottles of water under my bed and it’s the first thing I do in the morning before I brush my teeth.

“For every kilogram of fluids you lose you need to take in a litre. You need to be taking in about four litres of water a day, with Dioralyte or even a pinch of salt. Or some popcorn with your water is a great job. The salt holds the water. Otherwise if you’re just taking in water it’s just going in and straight out.

“We’d have really upped the amount of fluids in the last few weeks, and then we’re told to try and stay out of the sun as much as possible, which is hard for some people of course. But when we do you’d be wearing peak caps and having sunblock on.”

Monaghan play Laois in their fourth-round qualifier on Sunday, their third consecutive weekend in action. Their highly-rated strength and conditioning coach, Ryan Porter, explains that while “we had four people bringing, aggressively, water on to the field against Leitrim, club players mightn’t have those resources readily available or have the awareness of how important it is."

Monaghan players have been registering weight loss figures ranging from 1.4kg to 3.2kg in recent weeks, and he believes "the GAA need to consider more water breaks when temperatures increase.

"From our first match against Tyrone which was played in the heat, it’s something [hydration] we’ve been very conscious of this summer.

“But it’s something all teams and all players need to be aware of.”