Ireland seek rebirth in Perth after downgrade in Adelaide 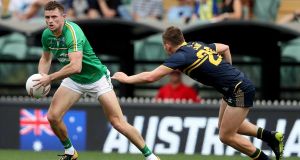 Ireland’s Pearce Hanley in action at Sunday’s International Rules series first Test against Australia. Hanley is ruled out of the second Test due to injury. Photograph: Tommy Dickson/Inpho

Ireland face into a second Test in Perth trailing by 10 points, a deficit that has never been overturned in the history of the series. The most encouraging precedent goes back to 2003 when John O’Keeffe’s team lost the first test in Perth by 10 but rebounded a week later to win the second by three points, enough to make it a split decision but not enough to win.

Manager Joe Kernan was frustrated after a week of illness in camp and then an injury that rules out Pearce Hanley from the second Test. He further regretted the loss of composure that leaves the team with a daunting task to maintain respectability, let alone win.

“The third quarter always seems to be a problem,” he reflected on Monday morning before leaving Adelaide. “It was composure really – we lost it completely. We asked the boys for the last quarter to hit the wings and we got three or four scores in a row – it got us back in the game.

“We had a few goal chances we didn’t take. If even one had gone in it would be a different story. It’s far from over, though.”

The week ahead will involve video analysis and critiquing what went wrong in a match they led by 10 nearly halfway through the second quarter.

“It’s about looking at how we played – how we can improve and how we can stop the Australians doing the things they did well. There’s a lot of video work to be done, assessing where we went wrong. Our passing was poor at times and that’s not like us. It’s about being calm under pressure, which we weren’t at times yesterday.

“We need more guys in the scoring areas, lads popping points (in the international game, three-pointers) all the time. We need to hit the net: if we get five chances we need to take at least three of them.”

He was dismissive of an issue raised in the local media on Monday about the two injuries sustained by Ireland’s Pearce Hanley and Scott Pendlebury – both AFL players.

Australia coach Chris Scott was asked did it concern him that such incidents might impact on clubs’ willingness to release players. His reply that he did see what had happened as a difficulty was widely reported, although the comments that followed made clear his own commitment to seeing the series continue.

“Yeah, it does. It’s clearly something that’s on our minds, and I’m sure it’s on the minds of the Irish as well. If we want this series to work, we have to continue to push to get the best players out there.

Asked about the potential impact of the injuries on the future of the series, the Ireland manager said: “Injuries are a fact of life. These things happen. You can get injured in training as easily as in a game. It’s unfortunate for the two lads. It hit us more than them – Pearce was going well.”

Meanwhile, Kernan has decided to bring Monaghan’s Darren Hughes to Australia for Saturday’s second Test in Perth as a replacement for the injured Hanley.