Dublin keen to check the progress of new-look Kerry 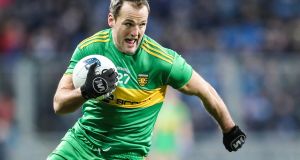 Michael Murphy: will be in action for Donegal against Tyrone. Photograph: Laszlo Geczo/Inpho

– Relations between the counties have been fractious enough in recent times and this is an important match for the counties, both precariously situated at the wrong end of the table. Donegal’s form has been more promising and Michael Murphy has got some game-time under his belt. Tyrone’s problems have been up front and they have the second lowest scoring total in the division. The visitors’ defence though looked open enough against Kildare and Mickey Harte’s side can edge this.

Mattie McGleenan has delivered an emphatic response to last year’s relegation with the division’s only unbeaten record and a win here would push them close to promotion. They should get it even if Down will be improved by Connaire Harrison’s return from suspension and their anxiety to bounce back from the poor display against Clare.

The bottom two counties in the division and the losers here can probably pack their bags for next season. Instinct suggests Offaly but Wexford have been more competitive in the matches to date.

Evidence, like the best points’ difference in the AFL, suggests that Armagh are finally going to get promoted. Even with Slaughtneil players available again, there’s little reason to suppose Derry can get in the way.

– Slightly surprising to see both propping up the table but Waterford’s form has been slightly better.

Carlow are enjoying another season’s challenging at the top. They can keep going here.

Two surprise performers so far – if Monaghan’s miracles of husbandry are that surprising any more – and both recent conquerors of Kerry, they also boast the meanest defences in the top flight. Galway’s ability to break at pace through Eamon Brannigan and Shane Walsh has been notable in recent matches and complements the evolving effectiveness of the defensive system. Although Monaghan have shown encouraging signs of spreading the burden on Conor McManus more thinly, the home team can maintain their 100 per cent record.

– Kildare have had no luck in what’s looking like a brief return to Division One with a sequence of defeats by less than one score. Mayo haven’t been particularly impressive apart from the narrow opening-day win in Monaghan but this is the time of the season when the team usually starts to make a move up the table. Lee Keegan’s return against Dublin was positive even if they never looked like winning the match. This however is the time to get motoring.

Eamonn Fitzmaurice has been combining block blooding of new talent with fitful performances. After back-to-back defeats though, Kerry can be expected to give a good account of themselves in Croke Park, which will be invaluable senior experience for the newcomers. Defence remains an issue for them and they have conceded the second biggest total in the division. Jim Gavin will however have noted that his team failed to beat Kerry twice last year and won’t want to that sequence to continue.

Liam Kearns’s occasional frustration with his team is understandable when they show what they can do, as in the dismantling of Meath. Louth actually won the fixture last year but are rooted to the bottom of the table now with Tipp challenging for promotion. That contrast will be emphasised here.

Bad memories for Roscommon of the 2016 qualifier defeat and this is a tricky assignment in Ennis. Kevin McStay has had to endure some erratic displays but they are challenging at the top. Clare have ground out some unexpected results to stay clear of relegation but the visitors can take the points.

Although just a point apart, you get the sense that Meath, after disappointing, back-to-back defeats, are fighting relegation whereas Cork are looking in the other direction. Veteran Donncha O’Connor is back for another season and with a better away record than at home, the visitors can swing this.

Longford got back on track after the agonising defeat in Armagh and need the points here with final fixtures against promotion rivals Fermanagh and Westmeath. Sligo in need for different reasons.

The promotion merry-go-round starts here with Westmeath needing to win against opponents with a 100 per cent record. Fermanagh have been very good but the home side can rise to the occasion.