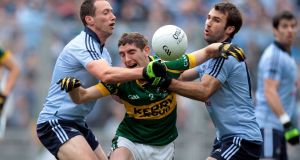 When Kerry arrive in Croke Park on Sunday afternoon, it might appear that whatever the outcome of the AFL Division One clash with Dublin, it won’t live long in the memory once the championship approaches high season in August.

There is however no ignoring the trend of the past two decades where first Kerry and now Dublin have matched championship dominance in the league.

In the 2000s, the counties met on 13 occasions between league and championship: Kerry won 10 and three were drawn. Since the 2009 All-Ireland quarter-final when Dublin, as rare favourites in the fixture, crashed to a 17-point defeat the pendulum has swung in the other direction.

In the 14 matches to date this decade – 10 league and four championship – Dublin have won 10, Kerry three with one drawn.

The watershed match was the opening league fixture of 2010, just six months after the championship wipe-out. A recast Dublin team won its first league encounter in Kerry for 28 years, triggering the trend that has seen the county establish a record for successive championship encounters, currently standing at four.

Two meetings later and Dublin had beaten Kerry in the 2011 All-Ireland final.

Barry Cahill’s playing career spanned both of those eras. He says that the rivalry with Kerry hadn’t been as pronounced for him, growing up.

“I was reared on Dublin and Meath as the big rivalry. Dublin and Kerry was back in the 1970s and we would only be aware of it from watching videos. When Dublin had a good team in the early 1990s Kerry were going through a lull and Cork were the dominant Munster team.

“To be honest though, I do think there was a mental block in the 2000s because we really had a very poor record against them. We ran them close in 2007 but that was probably our best performance under Pillar Caffrey.”

He remembers the lead-up to the infamous 2009 quarter-final (after which manager Pat Gilroy described his team as performing like ‘startled earwigs’) but says that the mood was positive.

“The collective feeling among the group was confident – Kerry hadn’t been playing well and were there for the taking: ‘this is our time!’ We really walked into it.

“There was a collective debrief later that year, going into 2010. What emerged was that Dublin’s best chance of going forward was not on the basis of having the 15 best individuals but a system in which the individual would be willing to sacrifice for the collective.

“Pat targeted that first match in Killarney. He trawled the entire county looking for new players and wanted a good start to the league that we could build on. Looking back, I can see that Kerry had won the All-Ireland and gone on holiday and they were hardly targeting the first game. But I wonder if, with hindsight, they’d realise that we needed to be kept down rather than encouraged.

Beating Kerry away in 2010 and a year later in Croke Park for the first time in 20 years was a powerful boost to Dublin’s confidence when it came to facing the same opponents later that September. On this occasion Dublin were the underdogs but Cahill says that the team came in ideally positioned.

“We knew the size of the ‘ask’ but we had the benefit of two very different games in the run-up to the final. We racked up 0-22 in the quarter-final against Tyrone and Diarmuid Connolly kicked seven from play but then we had the notorious semi-final with Donegal where we really had to dog it out. Kerry may have been influenced by 2009 but we finished really strongly with three great points, from Bernard Brogan, Kevin Nolan and Stephen’s [Cluxton] free.”

Dublin failed to beat Kerry in either of the two league matches last year, including the final which was narrowly lost. Regardless of that motivation, Cahill says that in the light of the county’s experience no league match, especially against Kerry, is lightly conceded.

“You can see that Jim Gavin targets every league game and doesn’t want to give out cheap wins to teams that Dublin could be playing later in the championship.”

1 The unsolved mystery of Goran Ivanisevic’s stunning Wimbledon win
2 Tipping Point: DeChambeau’s transformation raises questions, but who will ask them?
3 José Mourinho: Half-time row between Son and Lloris was ‘beautiful’
4 Dan Carter to return to Christchurch as an Auckland Blues player
5 The Game Changers: Vincent O’Brien, a pioneer who took Irish racing to the world
Real news has value SUBSCRIBE