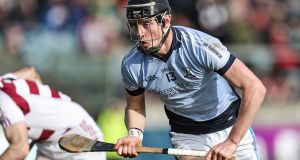 Limerick champions Na Piarsaigh have yet to decide as of Thursday night whether to appeal the suspensions handed down to two players before next week’s All-Ireland club hurling final.

There is the option to go to the GAA’s Central Appeals Committee but the club will have to balance a natural desire to support Tommy Grimes and Conor Boylan against other considerations.

Both were red-carded in the semi-final against Derry and Ulster champions Slaughtneil. They were dismissed in the early minutes of the second half for two off-the-ball incidents – Grimes for striking with the hurl and Boylan for kicking.

In both cases, the Limerick club believe the players were provoked but the referee’s report was specific about the infractions and, in the absence of video evidence to the contrary, the Central Hearings Committee handed down the one-match bans after Wednesday night’s meeting.

Consequently the club has to take into account the disruption to preparations for the St Patrick’s Day final were a distracting disciplinary process rumbling in the background and set that against the uncertain prospect of striking down the suspensions on appeal.

The suspensions come as a blow for the club, as both Grimes and Boylan are Limerick panellists. Even if neither was guaranteed a starting role in the final their absence weakens the bench options for manager Shane O’Neill.

Expectations are high that the final against defending champions Cuala will give the hurling decider a rare, competitive match. For the past 10 seasons the club hurling finals have desperately one-sided; six of them have been won by double-digit margins and the average win has been by nearly 10 points (9.9).

In that time just one match has been decided by less than a score, the 2013 match between Galway’s St Thomas’s and Kilcormac-Killoughey from Offaly.

Already the final is making history, as it is the first time that the champions of the previous two years have met in the next final, as Na Piarsaigh were Cuala’s predecessors as winners in 2016.

An argument could be made for Portumna and Ballyhale Shamrocks who contested the 2010 All-Ireland final but the Galway club had won back-to-back titles in 2008-09 whereas the Kilkenny champions’ previous victory had been in 2007.

There was better disciplinary news for the Corofin footballers, with full forward Martin Farragher cleared to play in the St Patrick’s Day final against Cork champions Nemo Rangers.

Farragher’s red card in the opening minute of Corofin’s All-Ireland semi-final against Moorefield became a cause celebre, once video review established that he had made no contact with opposing full back Liam Healy despite his having been red-carded by referee Derek O’Mahony for striking the latter with his knee.

For procedural reasons the matter had to go to a hearing but once before the Central Hearings Committee, the Galway club was able to adduce video evidence, leading to the conclusion that “the infraction had not been proven”.

He will now be free to line out on Saturday week in Croke Park.