Kilkenny eager to stem the tide of a resurgent Wexford 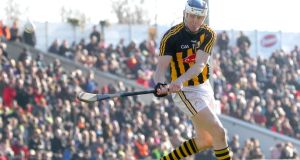 TJ Reid: was in fine scoring form against Tipperary and will prove a real threat to Wexford’s defence at Nowlan Park. Photograph: James Crombie/Inpho

Trust Kilkenny and Brian Cody to use a visit by Tipperary to tap into the best of themselves. True, neither team fielded teams likely to start in high summer and TJ Reid’s haul of 0-13 (six from play) had a huge bearing on that afternoon a fortnight ago. But landing 2-22 and edging Tipp in a one-point game made the world look familiar again to Kilkenny. Davy Fitzgerald’s Wexford revolution continues apace; a win today would give the county their best run of form against Kilkenny since 1971. They may have to do so without Lee Chin. Expect a rousing game and a return to the old order in this fixture – at least for the time being.

This is a crucial game for Cork in Munster hurling’s version of high Mass. John Meyler’s team have found their groove for parts in all games but have made life difficult for themselves, falling into a first half hole against Clare and then reduced to 13 men for the final 45 minutes of the Waterford game. They will have to plan without Séamus Harnedy, who is serving his red-card suspension while Jason Forde is likely to come back in for Tipperary. Tipp’s firepower and home advantage should edge it.

Tony Kelly at midfield is one of five changes made by Clare as they seek to road-test their form after their sole league defeat to Davy Fitzgerald’s Wexford. Peter Duggan contributed 1-7 of their 1-13 total in that match. Ian Galvin and Conor McGrath come in to boost an attack that will face Waterford in siege mood. Derek McGrath knew this day was coming. Waterford’s slow march to another All-Ireland final was never going to include any league pyrotechnics. But they need a win here.

Galway’s period of delighting in obscurity ends here. The All-Ireland champions feature on the live television game in what is effectively the promotion-clinching game for Division 1A. Having won everything from this division last year, Micheal Donoghue’s team won’t be unduly fussed about returning to the top flight. Still, winning the first real test of the season is important. They have been workmanlike in their league duties so far without touching or ever needing to touch the heights they reached last year but a bumper crowd in Salthill for a double bill should bring them to life. Séamus Flanagan, Barry Murphy and Sean Finn have all returned to fitness over last week’s weather postponements and strengthen John Kiely’s hand as Limerick seek to make a statement. Galway are vulnerable at this time of year but should have enough.

Pat Gilroy’s Dublin team had their moments in their defeat to Galway and will seek to build on that. John McCaffrey comes into the team at left half back. Eamonn Kelly was worried about the lack of appetite in his Laois team after they lost to Offaly; they will need to recover that if they are to overcome Dublin here.

At least Antrim are clear about their fate: regardless of what happens in Birr, they face a relegation game against either Dublin or Laois. Neil McManus, their consistent sharp-shooter, is unavailable for this match. It has been a relatively encouraging league for Offaly and a solid win here would make for good quarter-final preparation.