If only weather was the biggest problem facing GAA schedules

Differences between clubs and counties’ requirements may prove irreconcilable 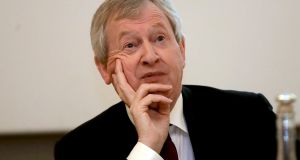 Ex-GAA director-general Páraic Duffy: “The majority of our club players . . . are not offered a fair, evenly distributed and planned schedule of club matches throughout the year.” Photograph: Donall Farmer/Inpho

Sometimes, you get away with it and other times, you don’t. For instance, the GAA in October 2000 voted to move its entire national league programmes – hurling had already switched in 1997 – to a calendar-year season.

As the autumn was too late a stage to change the 2000-01 NFL season, it went ahead with its three fixtures before Christmas and four afterwards.

Had that not been the case – say, had the changes been voted through at annual congress in April – there would have been a fixtures disaster. Out of nowhere, foot-and-mouth disease descended in February 2001, initially on Northern Ireland and then on the rest of the island, which caused a wipe-out of sporting fixtures.

Right now, after the worst blizzards in 36 years, the GAA is desperately scrambling to find space for the remaining fixtures of its league schedules. If it’s just about contained at the cost so far of a Division Four final pushed back to the second Sunday of April, that state of affairs depends on no further weather problems in March.

As the GAA’s director of games administration, Feargal McGill put it last week on these pages, the new calendar is being “stress-tested”. The trial schedules at this time of the year aren’t however even at their most experimental, just their most vulnerable to bad weather.

When it comes time to pass judgement on the current calendar, it is likely that more attention will be focused on the round-robin championship structures and the bringing forward of the All-Ireland finals into August than how tight the league schedules are.

The impetus behind the proposal was to devise a timetable that would address the twin issues of player burnout and inadequate club fixtures’ schedules. By shortening the inter-county season, it reduces the training to matches ratio and creates additional dates for clubs.

This is more marked in the case of September and the later summer than in the provision of April as a club-orientated month. The latter will be affected by the imminence of the championship and although county panel preparations have been curtailed, scale of benefits for clubs and their players remains to be seen.

A central problem for Gaelic games is the shadowy grey area that it inhabits between amateurism and professionalism. That the former principle is upheld in relation to the core tenet – players aren’t paid to play – goes hand in hand with increasingly professional approaches to many aspects of the games.

Already the growing number of sports science experts from within the GAA have drawn attention to how amateur players are frequently subject to professional training without the ability to rest.

Were the GAA fully professional the current fixtures anxieties wouldn’t be as acute because teams would have higher-quality playing facilities, with for instance underground heating like Croke Park and matches wouldn’t be called off as easily.

Conversely if the games were purely amateur they could in some cases be played on weekdays or at different times that weren’t required to suit a large spectator following and often the interests of broadcast rights holders.

In both cases there would also be no multi-eligibility dilemma, as players would have one team or at most, two if a strictly representative – ie just a handful of matches in any given year – level is included.

Of course counties used to be more conventionally representative in that the championship summer featured few matches with enormous gaps.

Now instead, elite players are identified most strongly amongst the public – and sometimes themselves – with their county jersey and only in their home place with the club. Yet they are pulled between the two and only in the past few seasons has the number of teams for whom they are eligible to play been steadily reduced from frequently absurd levels.

Similarly, the leagues and championship are now be run on more rational lines with matches coming thick and fast as with any professional sport – except that teams aren’t full-time and generally have full-time occupations, which impact on injury management and rest.

It’s not easy to roll back that intensity either given that the GAA depends heavily on what is generated from gate receipts and media rights.

Even in the counties that balance is hard to strike. There would for instance be an extra weekend for the AHL had Central Council not decided to retain the competition’s quarter-finals. But the one of the reasons for the quarter-finals was to generate additional revenue for counties, who in six-team divisions could end up with just two home fixtures.

That consideration helped to influence the retention of the quarter-finals and the removal of what would have been a further, valuable blank weekend for hurling.

In his introduction to the blueprint for this year’s fixtures calendar, now outgoing GAA director general Páraic Duffy outlined the thinking behind it.

“An obvious and unacceptable truth is that the majority of our club players, specifically those not involved in inter-county teams, are not offered a fair, evenly distributed and planned schedule of club matches throughout the year.

You’d imagine that everyone will wish the trial well in finding an accommodation between club and county but the differences may prove irreconcilable.