Fancy a trip to the Italian Grand Prix at Monza? Here’s how

Flights, tickets and accommodation details for one of Formula One’s oldest races 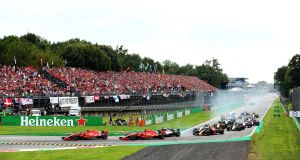 The Italian Grand Prix is one of the oldest races on the circuit. Photo: Dan Istitene/Getty Images

The Italian Grand Prix was first staged in 1921 and is the fifth oldest in Formula One history. This year’s race will be the 89th incarnation. The first race was on a track near Montichiari but for the most part the Italian Grand Prix has been staged at Monza, a 5.7 kilometre circuit with the race lasting 53 laps. The racetrack just outside Milan has hosted every Italian Grand Prix since 1981.

The current F1 championship leader Britain’s Lewis Hamilton leads the way alongside Michael Schumacher with five victories apiece in the Italian Grand Prix. Hamilton has won four of the last five faces at Monza. There is no surprise that Ferrari (19) lead the roll of honour in terms of winning the race. McLaren (10) are second with Mercedes (nine) third on the all-time list.

Over the years seven drivers have been killed during a F1 race at Monza, the last of which was Sweden’s Ronnie Petersen in September, 1978. There were 14 spectators killed when German driver Wolfgang von Trips crashed at the Curva Parabolica in the 1961 Italian Grand Prix.

Getting there: Flying with Aer Lingus to Milan (Malpensa), going out on a 7.0am flight on Friday, September 6th and coming back on Monday, September 9th currently costs €317.98. Ryanair have a 6.15am flight on the Friday, into Bergamo with a Monday night return at 9.55pm for €379.98. Malpensa airport to Monza is just under 60 kilometres. You can get a train from the airport to Milano Porta Garibaldi (€4-€14) – it goes on the hour and takes about 42 minutes – before switching to local services (€3-€4) for a 16-minute commute to Monza. Taking a bus to Terminal 2 at Malpensa, you can go straight to Monza for €3-€8. A taxi will cost €90-€110.

There are a number of Irish travel agents that offer packages for the Italian Grand Prix. One of the cheaper options is provided by Cassidy Travel who have put together a three night itinerary for €779. It includes return flights from Dublin to Milan (Bergamo) with Ryanair, airport taxes and security charges with hand luggage only, three night’s accommodation at the 4 star Best Western Hotel Blaise & Francis and general admission tickets on Friday, Saturday and Sunday.

Tickets: General admission tickets start at €60 for the Friday and Saturday up to about €115 on race day. Seating is on grassy mounds, or small stands of three to four rows, and views vary greatly so get to the track early to claim a good spot. Some fans prefer the freedom to move around the circuit offered by general admission ticket, as well as the space to spread out. Video-walls are opposite some areas. This ticket provides access to the inside of the circuit at the Curva Biassono, Lesmo, Curva del Serraglio and Parabolica.

There are a huge variety of packages available starting at €199 for the Orange Experience which offers a commemorative tee shirt, a numbered seat, goodie bag and one or two other perks. At the other end of the scale is a package billed as The 1 OAK exclusive nightclub comes to the Paddock Club in Italy. It reads: “This year, 1 OAK’s exclusive nightlife pop-up will transport you to ultimate glamour. Enjoy a taste of New York’s acclaimed party scene in Italy. It’s the perfect way to spend race day.”

The 1 OAK has nightclubs in New York and Las Vegas and for €1,032.19 (Friday) or €5,385.35 (Friday-Sunday) they claim to offer “The best views from directly above the start line and team garages, the chance to jump on board a drivers’ parade truck for a guided lap of the track, get exclusive access to the F1 drivers and insights from  the people who make F1, join a glamorous party crowd including A-list celebrities and world-renowned DJs and enjoy the finest champagne and premium cocktails from New York’s hottest club.”

Where to stay: The standard price for a hotel in Milan for three nights over that weekend in September is between €750 and €1,200 but the Grand Hotel Barone di Saasj, a four star in Milan and just eight kilometres from Monza with a Metro station nearby was offering a room for three nights – it included breakfast – for €498.