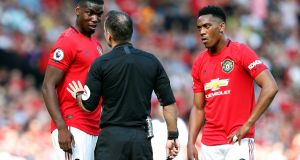 Manchester United are waiting on the results of scans on Anthony Martial amid concern the forward sustained a thigh problem in the defeat against Crystal Palace on Saturday.

The forward was seen limping when departing Old Trafford after the game and should the Frenchman have sustained a serious injury it may affect Alexis Sánchez’s proposed loan move to Internazionale, with Ole Gunnar Solskjær needing him for his forward line.

The manager played down concern over Martial and Luke Shaw, who was forced off with a hamstring injury. “We’ll have to wait and see,” the manager said after the match. “Hopefully they won’t be too bad and maybe we can have them training during the week.”

United were expected to resume discussions with Internazionale regarding Sánchez’s loan on Monday, with the last major stumbling block the proportion of his €22m-a-year salary the Italian club are to source. United want the latter to pay around €6m, Internazionale want a sum closer to €3m.

Marcos Rojo, one of Solskjær’s seven centre-backs, could leave before the continental window closes on September 2nd with Marseille, Milan and Monaco thought to be interested. – Guardian