The Backdoor: Kerry in September can spring a surprise 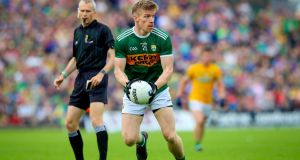 Think of 2009, and Tadhg Kennelly smashing into an unsuspecting Nicholas Murphy; think of 1978, and Mikey Sheehy with that mischievous lob, leaving Paddy Cullen in both a state of animation and disbelief.

That’s Kerry in September: liable to surprise in any infinite number of ways.

There’s a scatter of examples to choose from, each one as cunning as the next, and those faculties will be required again if they’re to overturn a Dublin side they’ve failed to beat - in the championship - since ambushing Pat Gilroy’s startled earwigs. After ten painful years, they’ll feel the drought must end.

The obvious strategy is to station Tommy Walsh near Dublin’s goal, testing the aerial ability of the champions’ apparent weak spot: the full-back line. Then again, that all seems a tad too predictable for a county like Kerry.

So how will they ambush Jim Gavin’s side? Because, in truth, nothing less will suffice if they’re to finally restore the natural order. Will they put David Moran, too, at the edge of the square, in some mad-hat attempt to load it with height?

Or will they station Walsh at midfield, along with any other six-footers they can pack into that third?

Or has the Currans brain-trust devised a plan for a deus ex machina, just as the favourites make their move down the stretch?

Given Dublin’s efficiency none of the above are likely to matter, though the Kerry approach will remain a major talking point as the game moves closer. With a chance to prevent the very thing a past generation was denied, there’s little chance of Peter Keane’s side resembling, to borrow Gilroy’s phrase, startled earwigs.

To cause an upset however, they’ll need to rely on the element of surprise.

“Mickey’s going to have to bring somebody else in. I know Malachy’s a manager in his own name, but look at Stephen Rochford going in with Donegal, Eamon O’Shea in with Tipperary hurlers.” - Former Tyrone footballer Brian McGuigan told the Irish News that Mickey Harte should recruit Malachy O’Rourke to replace the departing Stephen O’Neill. The three-time All-Ireland winner also threw Peter Canavan’s name into the equation.

Cork too honest in approach

In less than eight minutes Cork saw their hopes crumble before them - four goals had given Tipperary a resounding platform from which to catapult towards back-to-back Under-20 titles.

It came as a result of the Rebels committing the one cardinal sin concerning All-Ireland deciders, especially during early exchanges: honesty.

Games can never be won early on, we’re so often told, but they can be lost, as Cork were so brutally reminded of in Limerick. With a little less honesty it could easily have been avoided.

Billy Seymour had the ball in the Cork net within 20 seconds, when the astute move would have been to concede a free before the full-forward even claimed possession. Unpleasant as it is, it lays down a marker and, importantly, keeps the game competitive.

Five minutes later when Jake Morris set up Andrew Ormond for another maximum, Tipperary’s star man should have been unable to build up any sort of momentum before setting up Ormond’s strike. Again, it’s cynical. But it has sadly so often become the difference between silverware and despair.

Seymour’s second goal, and Jerome Cahill’s soon after, were just other examples of the consequences when morally flawless in a game of such high stakes.

14 - Galway will return to the All-Ireland senior ladies’ football final for the first time in 14 years. Since the 2005 decider however, they have won a total of ten Connacht titles.

Sunday saw the latest initiative seeking to bring ladies’ football back into public consciousness. Bringing the semi-finals to Croke Park was widely regarded as a positive step forward for a ladies’ game that had been struggling to attract substantial attendances for 364 days a year. Outside the annual All-Ireland Finals Day things weren’t all that rosy.

“I do think it’s improving but I don’t think it will ever get to the stage where you will have 10,000 at a ladies’ match,’’ said Cork manager Ephie Fitzgerald earlier this year. Dublin manager Mick Bohan expressed similar views, claiming there was a need to inject “romance” back into the game.

An attendance of 10,886 at Sunday’s games is hardly paltry but it also highlights the need to balance out the excitement generated by record attendances in autumn with further statistics.

Fitzgerald, like many others, also called for what seems like the obvious next step forward: affiliation with the GAA. Currently, the LGFA and the GAA are separate entities.

The arguments for an amalgamation are plentiful, from access to more expenses for female athletes to the prospect of more double-headers with the men’s game. Bold steps have already been taken, but it’s beyond time for the bolder step again.