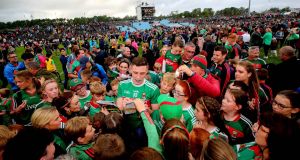 “If I’d hair it would have been standing up on my head,” said Peter Canavan of the atmosphere in Castlebar which couldn’t even be dampened by the heavens occasionally emptying themselves on top of the 27,023 stationed in MacHale Park.

“A soft day,” said a generous Mike Finnerty, although there’d have been nothing soft about the words the camera operators might have had for the elements, their hankies sodden from trying to remove the speckles from our view of the battle.

Brian Carney told us that the bulk of the attendance had turned up two hours before kick-off, like they were anticipating some form of apparition – which is kind of what they witnessed in the end. The last rites had, after all, been administered to Mayo’s All-Ireland-winning hopes more than once this summer, not least after that shellacking in Killarney, and here they were, risen from the dead. For at least another week, anyway.

Mind you, the roar that greeted Paddy McBrearty’s opening point suggested that around 27,000 of the crowd had made the pilgrimage down from Donegal. But Mayo voices were heard soon enough, lustily so in those closing stages when the Donegal folk must have felt they had more wides than there were people in the ground.

By then Sky had transported us back and forth to Navan to keep an eye on developments in the Meath v Kerry game, although thrilling and all as an ‘As It Stands’ table can be, there was divil a hint of movement in it once Kerry and Mayo took control of their respective proceedings.

“It’s like two prize fighters going at it blow for blow,” said Dick Clerkin of the climax to the game back in Castlebar, Andy Moran eventually delivering the knock-out punches for Mayo. He’s a mere child at 35, is Andy, but the way they talk about the fella, you’d swear he lined out for Mayo in that 1951 final.

“They’ll get to spin the wheel one more time back at Croke Park,” said Mike come the final whistle, Rachel Wyse asking her panel back in the studio if the wheel would stop on the jackpot this time around.

Initially, Kieran Donaghy was too fixated on that penalty awarded to Donegal (after Lee Keegan illegally felled/gently tangled with Michael Murphy) to comment, Peter noting with a chuckle that the Kerry man had pointed out that he’d have been given five penalties in the 2008 defeat by Tyrone if the ref had been as generous.

But once he let his 11-year-old grudge go, Donaghy doffed his cap to Mayo, reckoning they’re “a dangerous animal now”, capable of inflicting severe wounds on whoever might stray in to their path.

“How can you not be worried about Mayo,” he said, “the number of people who thought they had no chance, that Donegal were playing the brilliant football . . . you just never know what you’re going to get with Mayo,” he added, concluding that their All Ireland hopes largely depend on whether the Killarney or Castlebar Mayo turn up in Dublin next weekend for what will be their eighth semi-final in nine years.

Their road to Croker must be nigh on worn out.

But, with enough injury woes to fill your average A&E, and only a six-day turnaround after Saturday’s energy and emotion-sapping triumph, Canavan had a notion that when the wheel stops spinning next weekend, it’ll be another case of misfortune for Mayo, rather than them reaching their seventh final in 16 years.

It’s the mother, father, aunt and uncle of records, when you think about it. In that respect, this Mayo side are the ‘Fairytale Of New York’ of Gaelic football – never making it to number one, being confined to the runners-up spot by the Pet Shop Boys that are the Dubs.

But it doesn’t mean they don’t play a mighty tune. One day, the wheel will stop spinning on Sam. One day.