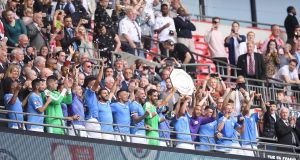 Call it a phony war, if you like, but the Community Shield suggested that Manchester City and Liverpool are set for another epic duel this season. Only a point separated them last term and there was nothing between them at the end of this clash – until City prevailed in a penalty shootout. Guardiola’s side won by the narrowest margin. Again.

Gabriel Jesus converted the decisive spot-kick after Giorgino Wijnaldum missed for Liverpool but there was plenty before that to please – and worry – both managers. Raheem Sterling gave City an early lead as City threatened to open a big gap but Liverpool reeled them, drawing level through Joel Matip and threatening to claim victory several times before the end.

Both managers had made it plain during the buildup that they would have welcomed a longer break before renewing hostilities after their battle last season. But that did not mean either of them was about to make this chore any easier for the other: 65 days after Jordan Henderson lifted their sixth European crown, Liverpool began with nine of the 11 players who started the Champions League final, with Joe Gomez stepping in for Joel Matip while Sadio Mané was replaced Divock Origi, the man who came off the bench to terminate Spurs’ resistance in Madrid.

Pep Guardiola, too, deployed nearly all of his team’s artillery, the main acknowledgment of this match’s ceremonial status being the inclusion of Claudio Bravo in goal ahead of Ederson, who began on the bench. Unlike Klopp, Guardiola could field an expensive new recruit, with Rodri, the £62.8m purchase from Atlético Madrid, anchoring midfield. “We have to prepare as if every match is a final,” said Guardiola and, given how little scope there was for error last season, that is an approach that these teams will probably have to sustain for the next nine months.

Liverpool were slow to get up to speed here. They were exposed by City’s superior sharpness even before falling behind in the 12th minute. City could have scored before that after Sterling dispossessed the dawdling Gomez 30 yards from goal and slipped a pass through to Leroy Sané, who fired into the side netting.

Roberto Firmino was the only Liverpool player who shone from the start. Mohamed Salah, by contrast, was off-colour: busy and dangerous but wasteful. He dragged a shot wide of the near post and did almost exactly the same several more times throughout the game.

The fact that City’s breakthrough came while they were at a numerical disadvantage – Sané was having an injury assessed on the sidelines – spoke of how slovenly Liverpool had started. The nature of the goal confirmed the point, as Liverpool’s defence were caught napping by a quick free-kick. Oleksandr Zinchenko headed a deep cross from Kyle Walker back across the six-yard box, where Sterling beat Henderson to the ball and forced it past Allison. It was nice way for Sterling to show he was unaffected by the silly boos from Liverpool fans, though this was his first goal against his former club in his 10th match since leaving them in 2015. But the red-clad fans would later have a chance to jeer him.

Salah failed to make the most of another good opportunity in the 16th minute when he raced on to a long diagonal pass over Zinchenko. Skittering into the right-hand side of the box, he again dragged a left-footed shot into the side netting.

Sterling could have increased City’s lead moments later but shot straight at Allison from eight yards after the ball fell to him following an important tackle by Van Dijk on Jesus.

Rodri has been headhunted as the heir to 34-year-old Fernandinho and he moved and passed with similar intelligence. But he was given a lesson in the competitiveness of the Premier League when he was muscled of the ball twice in the first half by the retreating Firmino. The second occasion led to the ball being worked to Salah who, having found his mojo, danced past two opponents before releasing Firmino down the right, only for the Brazilian to overhit a pass for Wijnaldum.

City’s chief vulnerability, however, was in defence – especially at left-back, where Zinchenko found the going tough. He was not helped in the 29th minute by John Stones, whose weak header from a cross from the right by Origi demanded an intervention from Zinchenko that did not come: Salah should have punished him but toe-poked high and wide from an admittedly difficult angle.

By now City’s vibrancy had subsided. Guardiola, highly strung at the best of times, looked peeved on the sidelines; and when Gomez was not penalised for raising a foot to prod a bouncing ball away from David Silva, the City manager threw such a tantrum that the referee booked him.

City’s grip on the game loosened as Liverpool found a higher gear. Klopp’s team struck the frame of the goal twice in three minutes around the hour. First, Van Dijk hooked a shot on to the underside of the crossbar after a corner by Alexander-Arnold was allowed to bobble all the way to him at the edge of the six-yard box; reminiscent of City’s decisive escape at the Etihad Stadium in January, the Dutchman’s effort was millimetres from crossing the line. Then Salah cut into the right-hand side of the box and fizzed a low drive against the post.

Walker, resolving to get City back on to the front foot, launched into a storming run forward before feeding Sterling. Clean through on goal and with Walker offering support if needed, Sterling appeared overwhelmed by the options and allowed Allison to step out and simply take the ball off him. Yep, City’s sharpness had faded all right. And their defensive frailties – relative to the strength of the rest of their team – were being increasingly exposed by Liverpool, who soon equalised with a goal similar to City’s one.

Van Dijk, pulling wide to retrieve a free-kick from the right by Henderson, dabbed a dainty cross back across goal and Matip, freshly arrived from the bench, climbed above Nicolas Otamendi to nod into the net. Again one had to wonder whether Vincent Kompany would have permitted that.

Liverpool, spruced up by five substitutions and running through City’s midfield with impressive regularity, came closest to winning in normal time. Bravo foiled Naby Keita and Salah before the Egyptian finally beat the goalkeeper – only for Walker to make a spectacular clearance off the line. - Guardian