Dangers of too much too soon not confined to soccer

Putting youngsters into such a specialised environment hardly comes without problems 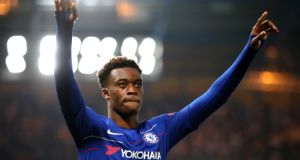 Callum Hudson-Odoi: reports suggest the 18-year-old is being offered a new deal worth up to €200,000 a week to reject Bayern Munich’s advances and remain at Chelsea. Photograph: Julian Finney/Getty Images

The Premier League and all its mesmeric excesses returns this week so it probably won’t be long before disgust is being expressed at the behaviour of some of its star performers.

A minor counterbalance to its overwhelming popularity is the Premier League’s apparent capacity for allowing other sports feel smugly superior.

When it comes to dubious conduct, football has become the cultural reference point for making everyone else feel better about their own supposed rectitude.

All kinds of habits, either on or off-field, can get conveniently boxed into a “well, at least it’s not soccer” context.

Absorb this complacency in undiluted form and you could suspect football is an isolated Petri-dish cultivating its own culture of crass.

Admittedly there’s abundant evidence over the years of football’s capacity to not just cross ethical lines but stamp them into oblivion. However, propagating stereotypes of footballers as uniquely unscrupulous is wishful thinking since temptation is often only separated from action by opportunity.

The Premier League transfer window closes on Thursday, the day before the new season kicks off, so eye-watering sums are currently being traded both in terms of transfer fees and salaries.

Just how eye-watering can be judged by reports of the Chelsea teenager Callum Hudson-Odoi being offered a new contract to stop him going to Bayern Munich. To date he has played just a dozen Premier League games in his fledgling career. The new deal is apparently worth up to €200,000 a week. Hudson-Odoi is 18.

Of the more senior among us, hark back to 18: offered ten million a year, what odds would you give yourself making 19?

That sort of money presents a level of temptation most of us can’t even begin to comprehend. It’s having most anything you want on speed-dial. And of course being fated never to be lonely.

Presuming on restraint in such circumstances is surely presuming too much.

Such a scenario could get even the most mature veering off the middle of the road, never mind a young person full of inquisitiveness and with the financial capacity to push exuberance to the max.

Horror stories abound of players being given too much, too young, and destroying both themselves and their talent in the process.

However, given the amounts involved, the wonder in many ways is how such stories aren’t even more plentiful, something to bear in mind perhaps when tempted to get too pious about life inside football’s unrealistic bubble.

There’s little disputing though that elite football can seem as divorced from everyday concerns as the top echelons of Hollywood. But even La-La Land’s foundations aren’t so rooted in flogging ‘the dream’ to young people as soccer’s are. In fact the increasingly ludicrous money swimming about at the very top of the game even has prestigious clubs pinning their ambitions to youth more and more.

Last week Liverpool signed 16-year-old Harvey Elliott from Fulham and immediately stuck him into a senior friendly against Napoli.

Elliott was just 15 when he made his senior debut for Fulham. His colossal potential had him linked with top clubs such as Real Madrid and Barcelona before he opted for Liverpool after his youth contract wound up in June.

Investing in a precocious teenager’s signature is a gamble that nevertheless makes business sense.

In a market when Gareth Bale can get a million a week playing in China, even the European champions are forced to bet on potential rather than investing in proven articles that are beyond the pay-grade of all but a tiny few clubs.

It’s an economic outlook that makes it more likely the game’s academy system will get even more ruthlessly competitive in years to come, targeting talent even earlier and fighting off competitors with the sort of money that can be life-changing for families.

This is an environment when tying teenage potential down on long-term €30,000 a week contracts isn’t unusual.

That their attrition rate is nightmarish doesn’t prevent academy offers from being sold as the dream. But putting youngsters into such a specialised environment hardly comes without problems.

It’s an old sporting quandary that excellence is best moulded young although often at a painful cost to the individual. And it’s far from just a football issue.

Andre Agassi memorably recounted hating tennis, the game which made his fortune but often left him desperately unhappy since it came to define everything he felt about himself.

Such dangers are known across the spectrum of professional sport. It’s just that football has become the biggest, richest and most visible expression of it.

The impact of rejection on the vast majority who don’t eventually make it through a system which in many cases has come to define them can be immense.

But even the minority who do come through, exhibiting a level of drive and ambition as alien to most of us as their original talent with a ball, are presented with challenges too.

From an early age their ability has been quantified and commoditised in a system that values them purely in terms of football ability and potential dividend.

Can it be any surprise that those growing up in a distorted environment, where delivery on the pitch is the primary consideration of their worth, might struggle to maintain the sort of perspective the rest of us take for granted.

In circumstances where so much gets forgiven and facilitated so long as performance levels are maintained, even the most level-headed might suspect that normal rules don’t apply to them.

Such ‘hot-housing’ of young talent is becoming more common in all sports. But if it pays off in terms of performance on the pitch then it’s naive to presume there aren’t potential pitfalls too.

Football’s bubble can seem grotesque at times. But the dangers of too much too soon aren’t neatly confined inside it, no matter how reassuring it feels sometimes to presume so.