Rangers start with a bang after last gasp win at Kilmarnock 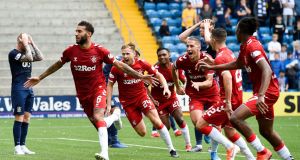 A pitch invasion from the away fans followed Connor Goldson’s 91st-minute header that secured a 2-1 victory for Rangers at Kilmarnock. TV footage appeared to show three fans climbing on to the disabled fans’ shelter, which collapsed as fans jumped up and down following the winning goal.

Police Scotland said four men were arrested on suspicion of breaching the peace, while one man was injured and needed treatment following the collapse of the roof.

A spokeswoman for the force said: “An investigation is under way following a pitch incursion. The incident resulted in the roof of a shelter collapsing and one man being injured. He received medical treatment at the ground and our inquiries are ongoing. Four men were arrested in connection with breaching the peace.”

Kilmarnock are also investigating after witnesses reported Rangers fans being “crushed” trying to get into Rugby Park because of problems at the turnstiles. The away end was only approximately three-quarters full at kick-off but, by the dramatic conclusion of the game, Rangers fans could be seen sitting and standing on the stadium’s stairs and entrances to terraces.

Goldson’s last-gasp winner ensured Rangers suffered no repeat of last season’s Rugby Park woes as they kicked off the new campaign with a dramatic 2-1 win.

Just 77 days had passed since Kilmarnock sealed their best league finish since 1966 with victory over the Light Blues in Steve Clarke’s last game in charge.

But their Europa League disaster against Connah’s Quay Nomads had deflated much of the optimism that was swirling round the club back then and Alessio admits he is already feeling the pressure.

But Gerrard will hope the victory is a sign his team have come up with a way to win the scrappy points they missed out on last season as Celtic were again allowed to claim the Ladbrokes Premiership title.

Alfredo Morelos — again urged by his boss to clarify his plans for the future this week — returned to spearhead the visitors’ attack while former Killie boys Jordan Jones and Greg Stewart started on the bench on their return to Ayrshire.

The hosts had new goalkeeper Laurentiu Branescu and midfielder Mohamed El Makrini on display but they quickly adopted a similar look to last season’s Clarke outfit, putting 10 men behind the ball while daring Gers to break them down.

Goldson’s ball over the top eight minutes in almost did just that. Stuart Findlay lost the flight in the sun, allowing Morelos in behind but the Colombian’s attempted lob was palmed behind by on-loan Juventus stopper Branescu.

Alessio would have been pleased enough as his side stood firm as Rangers held on to the ball while doing little with it. But he could afford no switch-offs and paid a hefty price after 16 minutes as Findlay again went to sleep.

The centre-back allowed Nikola Katic to wander free and plant a firm header on James Tavernier’s corner. Branescu’s parry did not clear the danger and Arfield rammed home from close range.

Wes Foderingham had to be alert at the other end to keep out an Eamonn Brophy attempt but Killie’s stuffy tactics made it difficult for both sides to conjure clear openings.

Kilmarnock should have levelled up on after 56 minutes as Burke slid a perfect ball into the six-yard box for Brophy but the striker — who has not scored from open play since January’s win over Gerrard’s team — somehow failed to find the target with a terrible miscue.

Joe Aribo had been finding it hard to creep into the spaces where he’s most effective but Gers’ midfield signing from Charlton came close to adding his side’s second as he wriggled past a couple of challenges before seeing Branescu tip his strike away.

Jones’ introduction with quarter an hour left was greeted with howls from the home supporters. But the Killie faithful were out of their seats cheering on 83 minutes as O’Donnell grabbed his side an equaliser.

Chris Burke’s free-kick was allowed to drift all the way to the back post where the Scotland right-back stood unmarked before smashing the ball past Foderingham for the equaliser.

Rangers desperately poured forward hoping to retrieve the win. Branescu pulled off a crucial stop to deny Aribo’s swirling effort but there was no stopping Goldson as the defender bulleted home from another Tavernier corner.