CJ Stander proving his worth, Spurs into FA Cup fifth round 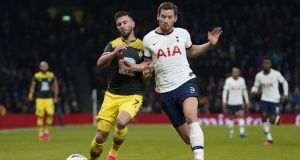 CJ Stander came into this year’s Six Nations Championship with his starting position seemingly in the balance, however he went a long way towards silencing the doubters with a man of the match performance in Ireland’s 19-12 win over Scotland last weekend. And this morning Gerry Thornley suggests the numbers Stander produces on both sides of the ball provide compelling evidence of his enduring importance to the team. He writes: “As indestructible and indefatigable as ever, Stander has completed 80 minutes in 21 of his last 22 Test starts, and only James Ryan (376 minutes) had more game time for Ireland in Japan than Stander (374). Stander made the second most tackles (53, with two missed) of any Irish player behind only Josh van der Flier (55), while Ryan made 44 with one missed. Stander beat more defenders (eight), made more offloads (four) than Ryan, and, of course, made the most carries of any Irish player with 74 (Ryan had 51).” Stander starts at number eight for Ireland against Wales on Saturday on what is likely to be a physical afternoon - Wayne Pivac is set to announce his starting XV this afternoon. Meanwhile a deal to sell a 15 per cent stake in the Six Nations to the private equity company CVC for €354 million is being held up, with the English, Welsh and Scottish unions all insisting the tournament remains on free-to-air television.

Elsewhere Tottenham Hotspur are through to the fifth round of the FA Cup after they beat Southampton 3-2 in a replay last night. Spurs took an early lead through a Jack Stephens own goal before Ireland’s Shane Long sent the sides in level at half-time. Danny Ings gave the Saints the lead in the 73rd minute before Lucas Moura and a late Son Heung-Min penalty sent Jose Mourinho’s side through, setting up a last-16 clash with Norwich. Meanwhile in Scotland Celtic remain on course to win a ninth-consecutive title after they beat Motherwell 4-0 at Fir Park, Odsonne Edouard scoring a brace. Neil Lennon’s Hoops remain seven points clear of Rangers, who beat Hibernian 2-1 at Ibrox last night and have a game in hand.