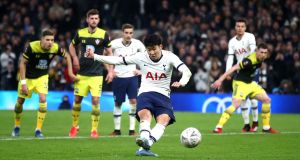 Tottenham’s motivation in hiring José Mourinho to replace Mauricio Pochettino was clear. They wanted the serial winner to guide them to silverware which, despite Pochettino’s excellence, had consistently eluded them. The drought pre-dated Pochettino. Since the 1984 Uefa Cup, the club have won just three major trophies.

Mourinho has viewed this season’s FA Cup through the prism of opportunity. If he could win it, maybe it could galvanise his tenure. When Danny Ings put Southampton 2-1 up in the 72nd minute of this fourth-round replay, the prospect of Spurs advancing to a home last-16 tie against Norwich seemed outlandish.

Southampton had been much the better team, particularly during a one-sided first half. The cohesive football had belonged to them. Yet Spurs found a way to dig deeper. They did not play particularly pretty football but in the end it was winning football.

Lucas Moura swapped passes with Dele Alli to score with a fierce low shot, having skipped past the substitute Jannik Vestergaard and, as extra time loomed, Alli – who had come off the bench to make a tangible difference – curled a wonderful pass through for Son Heung-min. He was unbalanced and sent tumbling by Angus Gunn and, from the resulting penalty, the South Korean found the bottom corner. The contact on Son looked minimal but for the referee, David Coote, it was sufficient.

Neither club had wanted this replay, given the manner in which it intruded into the mid-season break, but once it was required – courtesy of Sofiane Boufal’s late equaliser for Southampton at St Mary’s – both managers did not hold back. Strong line-ups were the order of the evening. Neither club play again until the weekend after next.

Mourinho sprang the tactical surprise, switching to a back three and partnering Moura with Son up front. There was a return in midfield for Tanguy Ndombele, as Mourinho contended with the loss of Giovani Lo Celso to a thigh problem and the fact that Alli was fit enough only for the bench. And it was Ndombele who forced the breakthrough.

It is no secret Mourinho wants more from the midfielder, who has been slowed down by a succession of knocks and strains, and the club’s record signing was in the mood at the outset. He caught a break when he helped Spurs into the lead but he would argue that it was overdue.

Ryan Sessegnon made the initial incision, tearing on to Harry Winks’s pass over the top, only to be halted by Jack Stephens’s last-ditch tackle. When the ball broke to Ndombele, he took on the shot. It was heading wide of the far post until it ricocheted off Stephens to wrong-foot Angus Gunn.

It was tough on Southampton, who were well-balanced and forward-thinking in their 4-2-2-2 system and might have taken the lead on two occasions. Ings took an excellent first touch to surge inside Jan Vertonghen but his shot was straight at Hugo Lloris – either side and he would have scored – while the Spurs goalkeeper appeared to misread a low Nathan Redmond shot before saving with his trailing leg.

Ndombele is fun to watch. He had opened up by spinning away from one opponent and bursting upfield while there was the moment on 18 minutes when he out-skilled two more. But Southampton were far superior as a collective in the first half and the equaliser had been signposted, with Ings rattling the crossbar after getting in behind the creaking Vertonghen and Lloris parrying weakly from Ryan Bertrand’s long-ranger.

Lloris got away with that one. He would not be so lucky in the 34th minute. Boufal found space in between the lines and fed Redmond, who spun and shot for the far post. When Lloris pushed it out, Shane Long was all alone to sweep home. Spurs were poor on the defensive cover and there were other instances of them giving up too much space, particularly in the areas between the wide centre backs and the wing backs.

Mourinho had work to do at half-time because his team had not moved the ball with any conviction and, when they had flickers on the counter at the end of the period, their final decisions were poor. Despite the loss of James Ward-Prowse to a grisly-looking injury, Southampton were firmly in charge at that point.

Boufal miscued when gloriously placed after a burst from Ings on 50 minutes and Mourinho had seen enough. His 3-5-2 formation had not worked and he reconfigured to 4-2-3-1, swapping Vertonghen for Gedson Fernandes. He then sent on Alli for Ndombele, the latter having run out of steam in alarming fashion. Vertonghen looked devastated and brooded darkly on the bench.

It was Southampton who hogged possession and controlled the tempo. It was difficult to isolate any star performer for them; it was a team display in the truest sense; defensively tight, coordinated in terms of pressing and dangerous on the ball.

Vestergaard extended Lloris with a header from a corner and it was no surprise when Southampton took the lead. What a goal it was, Long’s clearing header from inside his own box releasing Redmond and the winger tearing into Spurs territory before findings Ings, who stepped inside Japhet Tanganga and finished. Game over? It looked that way. Then it did not. Somehow Mourinho found a way. – Guardian

Solskjaer scathing of England’s handling of Mason Greenwood 11:50
Rory McIlroy starts well in US Open, Zlatan ensures there’s no Tallaght fairytale 07:57
Naomi Osaka to miss French Open with a hamstring injury 07:06
Dual clubs flourishing thanks to knowing exactly where they stand 06:05
James Hume reaping the benefits of Dan McFarland’s call to ‘knuckle down’ 06:00