Linda Djougang relishing trailblazing role as she aims for the top

‘People are like ‘who inspired you?’ I inspired myself’ says Leinster and Ireland prop 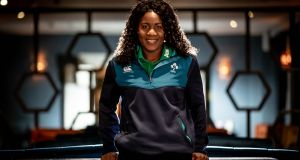 Linda Djougang: “I don’t come from a really privileged family or I didn’t go to a private school or anything like that, and everything that I have I had to work for so I can be who I am.” Photograph: Morgan Treacy/Inpho

At 7am the next morning Linda Djougang went from being an international prop to a student nurse, beginning a 13-hour shift in Tallaght Hospital. This has been her life for the past four years; a constant tension between rugby and college, where she is in her final year at Trinity College Dublin.

“Obviously my body is tired but I am not, because I know I have another commitment, another job to do. When I’m there I’m giving 110 percent, like I would on the pitch.”

Rugby wasn’t on Djougang’s radar growing up in Cameroon, but sport was: “I always knew I would represent my country at some level,” she says.

It was Djougang’s mother that gifted her with a grá for sport.

I ended up getting my CAO, something in Dundalk, I had no idea what it was. I remember crying for days

“My mom used to play football for fun, all the moms would play on a Saturday and the kids, like myself, would be running on the side and getting water etc. I remember my mum scoring a goal and all the kids being like woah! And I was like ‘Wow, that’s my mum’. I obviously look up to my mum because she was that role model for me. She loved sports, and I loved it because she did.”

Djougang moved to Rush, Co Dublin when she was nine-years-old. There, she joined the local athletics club and became heavily involved with shot put. (A career brought to an abrupt end when her dad and step mom didn’t give her a lift to an All-Ireland final, at the time unsupportive of her shot putting – a move that turned out well in the long run.)

In Rush, Djougang was going against the grain playing rugby.

“On the days where I went from Rush to rugby, I felt like I was living two lives. There’s no such thing as rugby in Rush, it’s more GAA. I felt like a rugby player in town, and the minute I stepped on the 33 bus, I’m a different person.”

So, how and why rugby?

“It was a long journey,” she laughs, and it began with rejection, persistence, and a missed phone call, one telling her she had, in fact, been accepted to the Trinity Access Programme (TAP), a course that engages with communities and schools in low progression areas to facilitate substantive steps towards going to third-level.

“First time round I didn’t get it. I ended up getting my CAO, something in Dundalk, I had no idea what it was. I remember crying for days because I really felt stuck, you know when you depend so much on your LC, the work that you have put and you don’t get what you want. I really felt kind of like it was the most depressing time I have felt, but I just didn’t give up.”

This marked the start of her life as she now knows it.

“That was the beginning of my journey,” Djougang acknowledges, “that phone call changed everything for me.”

Through TAP, she got to choose the most appropriate college course for her, was successful in obtaining an internship at Grant Thornton, which led to agreeing to play a social tag rugby game, catching the eye of Michelle Byrne, Wanderers’ rugby manager.

This snowballed into Djougang jumping from Division 4 with Wanderers to the All-Ireland League with Belvedere to Leinster trials and a stint with the Ireland Sevens team, giving Djougang “a taste of what rugby is really like and the intensity of it”.

It was Sevens that put Djougang into contention for the Six Nations that year, but ultimately, she “didn’t make the squad”. She had the talent and physicality, but there was a piece of the puzzle missing, quickly rectified by head coach, Adam Griggs, “what do you think about playing prop”?

The future for both Djougang and women’s rugby is bright, albeit unclear

This, Djougang says, “was the best thing. Being prop enabled me to get into the Ireland squad . . . He definitely saw a gap in the problem, like: ‘you go there, master that position’ ”.

Since that fateful decision, Djougang has been a valued athlete at the forefront of history in women’s rugby: Her first Six Nations Campaign in 2019 was met with record-breaking crowds; she scored her first try for Leinster in an unprecedented match against Harlequins in Twickenham. The impact of this is not lost on Djougang.

“You can never go to a rugby game saying it’s just another game. You feel it, you know what is needed of you, I don’t feel like there’s a game where I play and where there wasn’t any pressure to perform. You’re constantly aware of the need to perform.”

For some, the road to rugby is clear. For girls and women though, more direction is needed, they have to carve their own path.

“I don’t come from a really privileged family or I didn’t go to a private school or anything like that, and everything that I have I had to work for so I can be who I am and nobody can ever take that away from me.

“There’s younger girls looking up to me who also don’t have that, but that’s what’s unique about me and I’m able to put that into my game. I’m so different and I love it, cause that’s me.”

The future for both Djougang and women’s rugby is bright, albeit unclear. Four years ago she couldn’t have imagined the trajectory her life would take and yet, she’s produced a remarkable result.

“People are like, ‘who inspired you?’ I inspired myself because I don’t know what I’m gonna do, or what’s gonna happen! I’m excited to see what’s going to happen... I get the opportunity to train with young girls in Skerries and Balbriggan and they look up to me, ‘oh my god you made it, I can too’. They’re definitely the future, and I can’t wait to see it.”

Until then there is an interprovincial title to defend with Leinster, a gruelling Six Nations campaign, World Cup 2021 qualification, more history to be made and of course, final year exams.