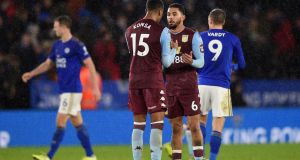 Lowly Aston Villa defied incessant pressure as they held out bravely for a 1-1 draw at Leicester City despite being unable to field a striker in their League Cup semi-final first leg on Wednesday. Freddy Guilbert put Villa ahead with their first shot of the game after 28 minutes and Leicester, second in the Premier League and hoping to reach their first cup final since 2000, needed a 74th-minute equaliser by Kelechi Iheanacho to force a draw. Back home, and the Football Association of Ireland (FAI) has appointed Roy Barrett, one of the country’s best-known stockbrokers, as its independent chairman. Two independent directors were also appointed, Catherine Guy and Liz Joyce.

With Joey Carbery joining Tyler Bleyendaal as a long-term absentee, Munster head coach Johann van Graan rated JJ Hanrahan as no better than a 50-50 chance due his hamstring injury for the province’s make-or-break Champions Cup game against Racing 92 at the Defense Arena on Sunday. Read your 'all you need to know guide' to the weekend’s Champions Cup matches (kick-off times, TV details, team news and more) here. In his column this week John O’Sullivan explains why Pro14 player rotation could give the Irish provinces a boost over their Top14 foes. He’s compared the number of players used over the festive period by the four Irish provinces and likewise for each of their Top14 opponents this weekend . . .