Leinster, Connacht, Ulster and Munster are all in action against French opposition 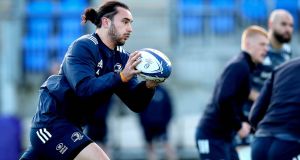 James Lowe’s Leinster are already through to the quarter-finals of the Champions Cup. Photograph: Ryan Byrne/Inpho

January gets a terrible press but it’s really not all bad - especially as the new year brings with it the business end of the Champions Cup pool stages.

This weekend all four provinces are in action against French opposition, all with their European dreams still intact ahead of the final two rounds of pool fixtures.

The chances of all four Irish sides making it into the quarter-finals are slim, but it’s possible - and the penultimate round of games could tee up an intriguing finale the weekend after next.

Leinster’s place in the last-eight is already assured, and they look the team to beat as they bid to reclaim the crown they lost to Saracens in Newcastle last year.

Ulster and Munster are in the hunt while injury-ravaged Connacht have a mountain to climb to progress - but they like to deal in the improbable.

Here is everything you need to know ahead of the penultimate round of pool action in the Heineken Champions Cup.

The fifth round of the Champions Cup pool stages, with Leinster, Ulster, Munster and Connacht all in European action.

All four of the provinces will be live on BT Sport, with only the Ospreys against Saracens being shown on free-to-air television. However, you call follow all four of the Irish sides on the Irish Times liveblog on Saturday and Sunday afternoon.

So, where do we stand?

As mentioned above, Leinster, Ulster, Munster and Connacht can all make it into the last-eight. Here is a look at how they’ve fared so far, and what they need to progress to the quarter-finals.

Leinster have been supreme in Europe so far this season, and are favourites to reclaim the crown they lost to Saracens in last year’s final. They are through to the quarter-finals with two games to spare, with second place Northampton (nine points) unable to catch them due to Leinster’s superior head-to-head record. Leo Cullen’s side have won four from four and picked up three bonus points, leaving them on 19 points - a tally only matched by English Premiership side Exeter. Leinster’s points difference is superior to the Chiefs (+77 plays +62), meaning they are currently the tournament’s top seeds.

Leinster welcome Lyon to the RDS on Sunday afternoon before a final round clash away to Benetton. If they win both with a bonus point they will finish the pool stages on 29 points and therefore would be guaranteed both home quarter and semi-finals as one of the top two seeds, with only Exeter able to match their overall points tally.

Like Leinster, Exeter have been in devastating form in Europe this year and have won four fixtures from four, picking up 19 points in the process. Unlike Leinster, their progression is yet to be confirmed, as they can still be caught in their pool by second place Glasgow - who have nine points. The two sides meet at Scotstoun this weekend, after the Chiefs thrashed Glasgow 34-18 in round two. If Glasgow fail to beat Exeter on Saturday, while overturning the negative head-to-head record in the process, then the Premiership side are through to the quarter-finals.

A defeat on Saturday would prove terminal to Glasgow’s hopes of reaching the knockout rounds, while Sale Sharks (six points) and La Rochelle (five points) are playing for pride in the final two rounds.

Ulster have arguably been the Champions Cup’s surprise package so far this term, with Dan McFarland’s side picking up four wins from four Pool Three matches - including a rousing 18-13 success at home to Clermont. They currently lie in top spot on 17 points but have the French giants breathing down their necks on 16. The Top 14 outfit can leapfrog Ulster when the two meet at Stade Marcel-Michelin on Saturday, with the province then welcoming Bath, who have nothing to play for, to Ravenhill in the final round of pool fixtures.

Ulster are guaranteed at least second place in Pool Three but two defeats could see their hard work undone and mean they miss out on a place in the quarter-finals. One victory would be enough to see them through, and they remain in control of their own destiny - however, as current fifth seeds, two wins might still not be enough to secure a quarter-final in Belfast.

Munster have won two, drawn one and lost one of their opening four Champions Cup fixtures, leaving them with plenty of work to do in order to reach the quarter-finals. Johann van Graan’s side beat a depleted Saracens at home before losing at Allianz Park, however it is the 21-21 draw with Racing 92 in round two they might rue the most. Racing currently lead the pool on 17 points, with Munster second on 11 and Saracens third on 10. Munster travel to Paris this weekend, with the hosts knowing a win will see them into the last eight.

If Munster fail to pick up any points in Paris, they will only be able to finish on a maximum of 16 for the pool - providing they beat the Ospreys with a bonus point in round six. Not only would this potentially leave them short of a top-eight seeding, but it would also clear the way for defending champions Saracens to leapfrog them into second place. Victory against Racing would leave Van Graan’s side confident of beating the Ospreys and reaching the knockout stages - although a Thomond Park quarter-final might be beyond their grasp.

Of all the Irish provinces Connacht are the least likely to make it into the quarter-finals, despite landing two of the best results in their history during the pool stages. Andy Friend’s side stunned Montpellier in round one, winning 23-20 at the Sportsground, before staging a huge comeback against Gloucester in Galway last time out - edging the Premiership side 27-24 with a last-minute try. However, defeats away to Toulouse and Gloucester mean they lie in third place on eight points, with qualification looking unlikely.

Connacht meet European aristocrats Toulouse - current pool leaders and third seeds on 18 points - this weekend, before a final round trip to Montpellier. Two bonus-point wins, improbable as that would be, could see the province through to the quarter-finals while even two wins without a bonus point probably wouldn’t be enough. Add in Connacht’s huge injury list - which has now passed the 20-man mark - and it would be a miracle of the men from the west progress to the last-eight.

Leinster have confirmed Johnny Sexton won’t play again ahead of the Six Nations, as he continues his rehabilitation from a knee injury sustained in the win over Northampton at Franklin’s Gardens. This means Ross Byrne is likely to continue at outhalf, as he bids to stake his claim for the Ireland number 10 jersey for clash with Scotland on February 1st. Elsewhere James Ryan is a doubt for the Lyon match after picking up a calf injury against Connacht. Ronan Kelleher, Jack Conan and Dan Leavy remain longer-term absentees.

Dan McFarland looks set to be able to play a full hand for Ulster’s trip to France, with Marcell Coetzee, Jordi Murphy and the white-hot John Cooney all passed fit to play on Saturday. Cooney scored 18 points in the 38-17 win over Munster and has since passed a HIA.

Joey Carbery’s injury woes have continued, with the prodigious outhalf set to miss the whole of the Six Nations campaign due to a wrist injury - a major blow for both Munster and Ireland. Carbery damaged wrist ligaments in the Pro14 defeat to Ulster and Johann van Graan now has a selection headache at outhalf - JJ Hanrahan has been out with a hamstring problem, while Tyler Bleyendaal hasn’t played since the middle of November. Elsewhere, Andrew Conway and Tommy O’Donnell are also doubts.

Where to start? The other provinces’ injury issues are brought into stark perspective when you look at Connacht’s, who have been ravaged throughout this campaign. Injuries to brothers Stephen and Conor Fitzgerald in the defeat to Leinster moved the number of first team absentees past the 20 mark. Bundee Aki, Ultan Dillane and Jack Carty are set to be available, but the Pro14 is now likely to be Andy Friend’s priority with their European prospects looking slim.

There are limited tickets available for Leinster’s clash with Lyon, which you can buy HERE.

And you can get a ticket to watch Connacht take on four-times European champions Toulouse HERE.

Who’s favourite to lift the trophy?

When does the Six Nations start?