Should the outhalf fail to pass a fitness test, a European debut beckons for Ben Healy 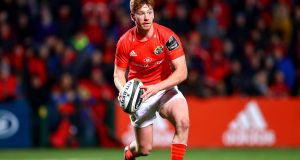 Ben Healy: could be called upon to fill the outhalf berth if JJ Hanrahan is not fit for Munster’s visit to Racing 92 in Paris. Photograph: James Crombie/Inpho

Such is the injury jinx that has afflicted Munster’s fabled number 10 jersey of late that their 20-year-old Academy player Ben Healy could be pitched into his European debut, and second senior game, in the province’s make-or-break Heineken Champions Cup game against Racing 92 at the Defense Arena on Sunday.

With Joey Carbery joining Tyler Bleyendaal as a long-term absentee, Munster head coach Johann van Graan rated JJ Hanrahan as no better than a 50-50 chance due to the hamstring injury which ruled him out of their 38-17 defeat by Ulster in Belfast last Friday.

“He was out on the pitch for a while today, did a bit of team training, not at 100 per cent yet. JJ is an experienced ‘10’ and an important member of our squad. He has been the in-form ‘10’ for Munster this season.

Although rated 50-50, the odds still favour Hanrahan starting, but were he ruled out, Munster’s remaining options would then be between Healy or inside centre Rory Scannell.

“We’ve been in this position before and it’s next man in. We will back JJ to be ready [but] I’m definitely not going to risk him because of the importance of this game. We’re really hopeful that he will be ready and if not, really excited to see Ben and Rory.”

With their penchant for 6-2 splits on the bench, Scannell has been covering outhalf in recent games so he has presumably been running there in training. But of his previous 101 starts for Munster, only two have been at ‘10’, a 33-16 win against Cardiff at Musgrave Park in February 2015 and a 22-6 defeat by the Dragons in Rodney Parade in December of that year when he kicked two penalties.

Even though he has rarely been found wanting from the tee, witness his match-winning penalty from halfway against Glasgow last season, Scannell has seldom been first-choice kicker and has landed just 12 conversions and eight penalties in his time with Munster, whereas Healy has always been his team’s primary goal-kicker, it may make more sense to go with the 20-year-old.

Furthermore, there would be an additional reshuffle in moving Scannell to ‘10’, with Munster then having to play Dan Goggin, Sammy Arnold or Keith Earls alongside Chris Farrell in midfield.

A product of Nenagh Ormond, Glenstal Abbey and Garryowen, Healy was the star turn when captaining Glenstal to their maiden Munster Schools Rugby Senior Cup in the final against CBC Cork less than two years ago. He has also represented Munster through all the age groups and started in two of the Irish Under-20s Grand Slam games last season, and alternated with fellow Munster academy outhalf Jake Flannery at the 2019 Under-20 World Cup in Argentina.

Healy started and scored 13 points for Garryowen when they beat City of Armagh 45-21 in the final of the 2018-19 All-Ireland Cup last April and kicked 11 points in his sole appearance for Munster when they lost 18-16 to Edinburgh at Musgrave Park in late November.

Not unlike Stephen Larkham in build and stature, as well as being a fine place-kicker, Healy has a particularly strong kicking game and according to those who know him has a good temperament. But coming up against Finn Russell and his chums amid the floodlights and razzmatazz of Racing’s indoor stadium would be quite an ask.

Van Graan admitted as much: “It will, it will, but I think that’s what sport is about. If he gets that opportunity, that’s just the way sport works. It’s an opportunity for somebody to do something great. He has grown within the squad, he’s been with the European squad for the last number of weeks.”

“We took him to the Ospreys game to get the feel of the squad and he was in every game in the warm-up, and the game against Edinburgh. He was in the Connacht 23 but JJ just played so well and it was tight in the back end so we didn’t put him on. So he has been part of the squad and if he does get selected he will hopefully perform on Sunday afternoon.”

In confirming that Carbery’s wrist ligament injury has ruled him out for months rather than weeks, van Graan tried to portray the 24-year-old’s latest mishap in the best light.

“At least there are some other things in the initial part of his rehab that we can do to improve him even more. That’s why I got him to Munster, he’s such a big part of where we want to take this team.”

The best, he added, was still ahead for Carberry.