Annalise Murphy clarifies she has not ended her Olympic ambitions 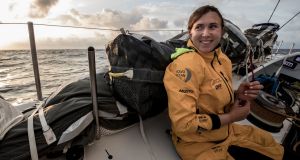 Annalise Murphy on board Turn the Tide on Plastic. “I’m determined to complete the Volvo Ocean Race commitment before deciding the best route”

Following this week’s news that Annalise Murphy will not contest this year’s Sailing World Championships in the Laser Radial class, the Olympic Silver medallist has clarified that she has not ended her Olympic ambitions.

Speaking from the Brazilian port city of Itajai where she is preparing for the next leg of the Volvo Ocean Race starting next week, the Rathfarnham sailor pointed to the intensity of training needed to compete in a world championship.

“If I was to go to Aarhus [Denmark] I wouldn’t have sailed the boat for almost a full year. I know how much work is needed to prepare for an event like that – I’m not stupid – you have to work hard and prepare, and I want to be winning events and in the hunt for medals rather than just making up the numbers.”

Ireland will field Howth Yacht Club’s Aoife Hopkins and Lough Derg YC’s Aisling Keller, both of whom have steadily risen through the performance ranks and emerged as contenders since Rio 2016.

Murphy took a year out of campaigning in the single-handed Radial last Summer when she accepted a place with Dee Caffari’s Turn the Tide On Plastic campaign in the 40,000 nautical-mile Volvo Ocean Race.

The eighth stage of the race from Brazil to Newport, Rhode Island, starts on Sunday, April 22nd, and marks the National YC sailor’s return to the race after a break for the Southern Ocean leg from New Zealand. Her friend John Fisher was lost at sea when he was swept overboard from Team Scallywag during a storm almost three weeks ago.

In Murphy’s race log that appears on Wednesdays in this newspaper and resumes next week, she wrote of the challenges transitioning from the discipline of an Olympic athlete into an ocean-racing sailor, and how she almost quit her team in Hong Kong. However, she persevered and is once again fully enjoying the experience with 10 weeks of the race remaining before the event finishes in The Hague on June 30th.

With the Sailing World Championships set to begin in Aarhus at the end of July, allowing for a short rest after the end of the Volvo race would mean next to no time to prepare for dinghy racing once more.

“My Olympic ambition definitely remains, and all options to continue campaigning will be examined, but I’m determined to complete the Volvo Ocean Race commitment before deciding the best route.

“It’s going to be pretty intense [over the next few months], and not much time between the stopovers, so I’ll probably take a week to chill out, but not much of a break until perhaps the end of September. I’m looking forward to having a proper routine again; it’s one of the things I miss most when at sea for several weeks on end.”

Her absence from the Radial class in Aarhus leaves the way clear for Hopkins and Keller to improve and qualify Ireland for a place at Tokyo 2020.

Up to 40 per cent of places in each discipline will be decided there, which means 18 countries for the Laser Radial event. In practice this means a top 23 or 24 finish overall in the fleet to qualify.

“I think it’ll be a good event for Aoife and Aishling to do, and benchmark themselves against all the other girls and see what level they’re at,” said Murphy.

Assuming Ireland does get a place for the class at the games and depending on Murphy’s plans following the round-the-world race, Irish Sailing’s performance director James O’Callaghan does not rule out the prospect of a three-way selection trials but probably not until 2019 at the very earliest.

Meanwhile, Murphy no longer has an International Moth, the foiling dinghy that has seen a growing following for some of the most radical technical developments in the sport.

“The class is getting mad, you just need more and more money to sail in it,” she said. “There’s new things happening all the time – I don’t have the mental capacity or money to keep up with it.”

However, the significantly cheaper one-design version of foiling Moth – the Wasp – might yet offer her a way of keeping up her interest in this type of sailing.