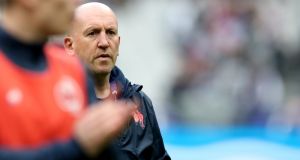 Andy Farrell will name his Ireland side for Saturday’s crunch Six Nations clash against Wales at 2pm this afternoon, with any changes likely to be enforced by injuries. Garry Ringrose injured his hand in the opening 19-12 win over Scotland and has been ruled out of Ireland’s next two Championship fixtures, while 21-year-old Caelan Doris is following protocols after suffering a head injury early on against the Scots. And according to Gerry Thornley they are likely to be replaced by Robbie Henshaw and Peter O’Mahony for the visit of the defending Grand Slam champions - you can read his predicted Ireland squad HERE. One position which remains up for debate has been at scrumhalf, with Conor Murray retaining his place ahead of the in-form John Cooney. However the duo have insisted any competition between themselves is healthy - Murray said: “We’re both very ambitious. We want to play. We want to start. We want to wear the number nine. There’s a lot of talk outside about the rivalry. I think there’s just a respect there.”

Elsewhere in his column this morning Gerry Thornley has reflected on France’s resounding win over England in Paris last Sunday - a victory which has blown this year’s Six Nations wide open. He suggests Les Bleus are now live title contenders for the first time in a decade - especially with Italy to play at home next - and that much of their early renaissance has been built on the arrival of Shaun Edwards as defence coach. He writes: “Improvements in defence are invariably quicker to implement, and Edwards’ impact was clear in France’s defensive effort against England. Already signed on for the duration of this World Cup cycle, in the immediate aftermath of Sunday’s win he could probably have signed a contract extension.” Meanwhile Eddie Jones’s side are still licking their wounds after their defeat at the Stade de France, and they could be without Manu Tuilagi for Saturday’s clash with Scotland on Saturday. He is set to discover the extent of a groin injury later today, with Jones also confirming he will stick with Tom Curry as number eight rather than switching the 21-year-old back to flanker.