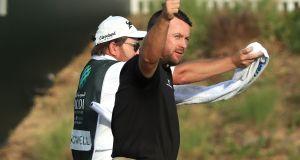 The redeye flight out of Jeddah took Graeme McDowell back to the US with a new set of goals. On an upward trend this past year, the 40-year-old Northern Irishman’s return to form – two wins, one in the Corales Puntacana Championship on the PGA Tour last March and the other in the Saudi International on the European Tour on Sunday – has enabled him to reclaim a place at golf’s elite table with the promise of yet more good times to come.

McDowell does not have much time to rest just yet as his quick return to the US came with the plan to ensure that he is fit and ready to go on the PGA Tour where he is one of three Irish professionals competing in the Pebble Beach Pro-Am (along with Pádraig Harrington and Séamus Power).

The fringe benefits, though, of McDowell’s win in Saudi Arabia were clear and obvious: in jumping up to 48th in the world rankings he has put himself on course for a return to the US Masters in April, and before that into the fields for two WGCs, the Mexico Championship and the Dell Technologies Matchplay Championship.

Of breaking back into the world’s top 50 for the first time since mid-2015 with a 16th win of his professional career, McDowell said: “It’s not like [it’s] the end of the road or something. I feel like it’s just part of the journey, like I’m getting back to being good enough to compete on the big stage... I’ve sort of broken that top-50 barrier probably three, four, six months faster than I thought I could.

“I had kind of geared my mind for patience. I mean, if I haven’t learned anything in 20 years, I’ve learned that you’ve got to be damn patient out here. It’s not about your bad weeks, it’s about really making your good weeks into great weeks!”

McDowell attributed his return to form to working with new coach Kevin Kirk, who numbers Patrick Reed and Lexi Thompson among his clients. The McDowell-Kirk hook-up got under way last August, and the player observed: “Kevin’s injected a lot of focus and motivation into my practice and my way of thinking. He helped me get my ball flight back. It’s amazing to be getting these leaps forward this soon really. It’s nice to test yourself.”

With the aim of maintaining that upward trend in the world rankings, and of getting into the big events of the season like the WGCs and the Major, McDowell plans on taking a family break before a stretch of tournaments that kicks off with the WGC in Mexico and includes the Players at Sawgrass.

One consequence of his upward trending is that he most likely won’t be defending in the Dominican Republic as that tournament goes head-to-head with the WGC-Dell Matchplay.

While McDowell, Harrington and Power are in action in Pebble Beach, Cormac Sharvin and Jonathan Caldwell are on duty in the ISPS Handa Vic Open in Australia (co-sanctioned by the European Tour).