Eddie Jones and England fearing the worst over Tuilagi injury 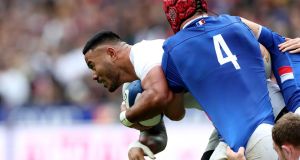 England could be without Manu Tuilagi for Saturday’s clash with Scotland at Murrayfield. Photograph: Billy Stickland/Inpho

England are still sweating on the fitness of Manu Tuilagi after he limped out of Sunday’s defeat by France with a groin injury. It is believed England are due to learn the results of Tuilagi’s MRI scan on Tuesday but, given his problems with groin injuries in the past, Eddie Jones will be bracing himself for the prospect of losing his star centre to another spell on the sidelines.

Jones on Monday named an unchanged 35-man training squad, resisting calls to add a specialist No 8 after England were outgunned in Paris. Tuilagi has been called into camp but with a six-day turnaround to Saturday’s match against Scotland it seems unlikely he will feature at Murrayfield. The 28-year-old has started 11 of England’s last 12 competitive matches after recovering from a litany of injuries including a career-threatening groin problem.

If Tuilagi is ruled out of Saturday’s fixture it would be a huge blow for Jones, who has admitted that England need to “find more power” after they were resoundingly beaten by France. Nonetheless, Jones has opted against making any changes to his squad, sticking to his guns over playing Tom Curry at No 8 in the absence of the injured Billy Vunipola.

Tuilagi’s potential absence would make that proposition all the more difficult and with Henry Slade sidelined with an ankle injury and Ben Te’o now based abroad, Jones’s options at outside centre are limited with Jonathan Joseph the likely favourite to start in Edinburgh. Mako Vunipola is set to return to add some ballast after he was rested in Paris while Anthony Watson is expected to be fit after missing out against France with a calf injury.

Jones’s refusal to alter his training squad is seemingly at odds with his explanation that England’s slow start in Paris was down to “holding the players back” at the start of their training camp in Portugal due to their club workloads on the back of their World Cup campaign. He said: “The only thing I can put my finger on, and again, it is my responsibility, is that we deliberately held the players back because we felt that off the back of the World Cup and playing club rugby they needed more of a break.

“We didn’t start training until Saturday and had a shorter preparation than we normally have for the first Six Nations. But again, that is no excuse and we had done enough training to be right.”

Jones however, has always given short shrift to public opinion and decided against adding Harlequins’ in-form No 8 Alex Dombrandt, who scored two tries against Exeter on Sunday, to his squad. Instead his attempts to recast Curry as a No 8 looks set to continue against Scotland with Jones believing the 21-year-old is in the mould of the former All Black Rodney So’oialo.

“I see him as a long-term No 8 so I am prepared to accept some mistakes for him to learn and become a better No 8,” said Jones. “We don’t have a one-game selection policy, just look at players like Genge and how long it has taken him to be a Test player – four years. They have to go through this apprenticeship and sometimes they go through some pain at the start of it. I think he can be a Rodney So’oialo-type player. A mobile, hard running No 8 that has ball skills.

“We can’t find another Billy so we won’t go down that track – we will find a different sort of player.”