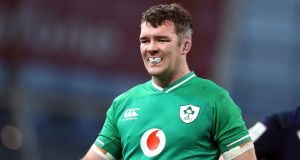 Peter O’Mahony is in line to resume in the Irish backrow against Wales. Photograph: Niall Carson/PA

Honeymoon period or not at the outset of the Andy Farrell era, no less than the first round win over Scotland, next Saturday’s 2020 Six Nations clash with the reigning Grand Slam champions Wales is verging on ‘must win’. Accordingly, while there may be a mood out there for change, Farrell’s selection when announced on Tuesday is likely to reflect that.

Victory over Wales, and in Ireland’s penultimate game at home to Italy, thus ensuring three wins from three at home while allowing for treks to Twickenham and Paris, would probably constitute the threshold for a satisfactory campaign. Lose to Wales and both games on the road, however, and that would make for a disappointing one.

To underline the importance of this game, confidence appears to remain a residual issue from the disappointments of 2019, but that would be damaged further by a loss against Wales, whereas a victory would give this Irish team a timely shot in the arm.

So it is that whatever changes there are from the side which started the Six Nations with that edgy 19-12 win over Scotland may well be restricted to those enforced by injury.

The injury jinx having struck the Irish midfield again, the likelihood is that Robbie Henshaw, as he did off the bench for the second half last Saturday, will replace the stricken Garry Ringrose in renewing his partnership with Bundee Aki.

It’s not necessarily a like for like replacement for the running and creative game of the in-form Ringrose, but barring a promotion for either Chris Farrell or Stuart McCloskey and switching Aki to ‘13’, the only other option would be to bring in Will Addison. All of which would seem too radical a re-shuffle.

Depending on the knee problem which prevented Keith Earls from training fully last week, it could be that Addison’s versatility will make him a fit for the bench.

Similarly, allowing for the continuing campaign behind John Cooney, there seems no compelling reason for breaking up the Conor Murray-Johnny Sexton partnership.

Cooney looked like what he is, a confident player in form, and being given the last 20 minutes was a statement of faith in him which might not have happened previously and which he justified.

Perhaps Murray showed signs of tiring a little before being withdrawn on the hour but he had a solid, influential game, and his partnership with Sexton was central to the win in many ways. Furthermore, the likelihood is they will improve further for that outing, as the team will need to do.

Up front, the signs seem to be that Tadhg Furlong will recover from his calf strain, and neither John Ryan nor Marty Moore have been added to the squad, while it remains to be seen whether David Kilcoyne and Caelan Doris will complete their return to play protocols in the seven-day turnaround. At the very least, it will seriously reduce their contributions in training this week.

Farrell sounded upbeat about both players in the immediate aftermath of the Scottish game, but given Doris suffered concussion in the opening quarter against Benetton last October and Will Connors has been added to the squad, it may be that he will be rested this week.

In this scenario, again there seems little compelling reason to break up the Peter O’Mahony-CJ Stander-Josh van der Flier backrow that was re-united after Doris’ early departure. Ironically, the latter’s elevation seemed to galvanise O’Mahony and Stander, whose typically big carrying and tackling numbers were augmented by winning three turnovers.

Devin Toner’s return after missing the World Cup is a heartwarming and popular story, judging by his huge ovation when introduced last Saturday. The maul motored for the first time in the second half after his first lineout take, but again James Ryan and Iain Henderson had strong, dynamic games.

Admittedly, Wales appear to have more choices before Wayne Pivac settles on his side, but this is partly because they would probably have learned comparatively little from their routine 42-0 win over Italy.

For example to what degree will Johnny McNicholl’s five missed tackles count against him on his debut, or Nick Tompkins’ dream debut off the bench tell in his favour? In the absence of the hugely influential Jonathan Davies, George North started at ‘13’ against Italy, but it could be that he will revert to right wing with Tompkins making his first Test start.