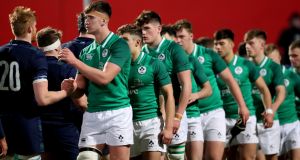 The Ireland U20s side greet their Scottish counterparts ahead of their game, which Ireland won 38-26 at Irish Independent Park, Cork. Photograph: James Crombie/Inpho

Ireland assistant coach Kieran Campbell expressed satisfaction following the 38-26 victory over Scotland in the opening match of the Under-20 Six Nations Championship, albeit that there will need to be an appreciable improvement in aspects of the performance.

Inevitably with what is essentially a scratch side, cohesion requires time to hone, so too for kinks on both sides of the ball to be smoothed over. Unfortunately the tournament doesn’t afford too much latitude – Ireland host Wales at Musgrave Park on Friday night – in that respect as the fixtures come thick and fast.

A priority will be to try and tweak facets of the game here and there, improving awareness and communication. The players will also have benefited from that game against Scotland, given a fuller understanding of what’s required, particularly, physically.

Campbell said: “It was a little bit of the unknown there going into the first game. You don’t get a chance to look at the opposition [in minute detail because of a lack of footage] and you’re getting caught with a few things. Overall it was the ideal first performance, plenty to be chuffed about and plenty to work on, a few developments [in playing style] to be made; they need to be made fast.

“I think the way that we built into a 33-12 lead was great. We are just going to look at the way we managed momentum a little bit in the middle of the second half; we took our foot off the pedal a little. That allowed them to find some space in the game. Fortunately we managed to bring it back and get a healthy lead at 38-19.”

Wales lost 17-7 at home to Italy – Stephen Aboud’s work at age grade level in Italian rugby has been visible for a couple of seasons now – so won’t lack motivation as they did to atone. Campbell admitted: “You can imagine the paint coming off the wall there a little bit in terms of getting them prepared for this week. We are going to get a pretty seismic physical battle on Friday.

“They are the underdog coming in so they will have a level of emotion and intensity that will come with that. We have to be as good if not better than we were against Scotland in the opening passages of the game, make sure that we build ourselves comfortably into the match, take control and impose ourselves from the beginning. That will drain that emotion from them. We are fortunate with the way things are going in Cork that we seem to get a lot of vociferous support.”

Wales will take some performance clues from the Scots, who scored four tries in Cork, and made things uncomfortable for Ireland at times, with some direct running, especially in the second half. Campbell continued: “What we talked about is consistency in delivering the line speed. The guys have learned that you are not going to get a collision that you are going to win easily.

“We have to make sure that when we get our line speed on that we ‘hit and finish,’ [in the tackle]. I think if I took one thing as the defence coach from the weekend, it is when we are on, and when we really stick our collisions, we are hugely effective. The Welsh will no doubt look at that and say the [Irish] line-speed’s good, but they [Ireland] have periods in the game where they’re not as consistent.”