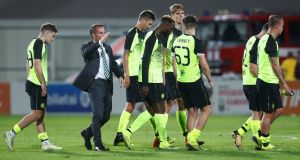 Celtic manager Brendan Rodgers with his players after their draw in Lithuania. Photograph: Ints Kalnins/Reuters

Celtic’s defensive woes continued as they were held to a 1-1 draw against FK Suduva in the first leg of their Europa League playoff in Lithuania. Brendan Rodgers’ team got off to the perfect start with Olivier Ntcham grabbing their crucial away goal early on, but by the 13th minute they had conceded to a free header. Burnley had Ben Gibson sent off as they suffered a 3-1 loss at Olympiakos, with Stephen Ward, Kevin Long and Jeff Hendrick all starting.

Jason Smyth now 13 years undefeated on the international stage, pocketed gold medal number 19 at the European Para-Athletics Championships in Berlin last night, with another record to boot. The T13 100 metres title completes a sprint double after the Irishman won the 200m on Tuesday, bringing Ireland’s medal tally in Berlin to seven. Earlier in the day 18-year-old Jordan Lee from Killarney, making his championship debut, won bronze in the T47 high jump, with a best height of 1.75 metres. Read Ian O’Riordan’s report on the day’s action here.

1 Bank leaked my loan request to family who tried to rip me off
2 A cardiac problem that could strike at any time
3 Irish health officials to ramp up precautions against coronavirus
4 Investigation into Dublin housing charity launched
5 Why Sinn Féin will not call the State by its name
6 McDonald rejects idea SF public meetings ‘an affront to democracy’
7 Irish vet in Australia: I look at this wombat, snoring on my chest, the last I’ll raise
8 Maureen Dowd: For the White House parasite, all restraint has gone
9 Coronavirus: ‘I’ve planned a holiday to northern Italy. Should I cancel?’
10 Coronavirus: Questions over Ireland’s readiness for what might come
11 Coronavirus: Irish citizens advised not to travel to Italy’s affected areas
12 Shannon floods: ‘The only way they will get me out of my home is in a box’
13 Garda warning after €500,000 of ‘movie money’ found in circulation
14 Costa living: ‘Move home to Ireland? I’d hate it’
15 Solar panels: How do they work - and are they worth it?
16 An Irishwoman in Milan: ‘Everything that usually seems important suddenly isn’t’
17 Doctor Who landed in 1950s rural Ireland last night. The fiddles never stopped
18 What evidence is there that the IRA still controls Sinn Féin?
19 Mary McAleese ‘shocked’ and disappointed at L’Arche abuse revelations
20 Graduates not well-equipped for future workplace, say employers
21 Nurse who stole from patients is struck off by High Court
22 Six Nations: No place to hide for Ireland’s misfiring captain
23 ‘He was angry and punched it about nine times’: Should you recline your airplane seat?
24 Steal a pig in Tipperary in 1841? You could be shipped off to Australia
25 Ryanair and Aer Lingus monitor impact of coronavirus on travel to Italy
26 Trinity College Dublin plans wildflower meadow on College Green
27 Eastern Europe faces a demographic crisis of its own making
28 Over $12m from sale of Walford handed over in Sean Dunne bankruptcy case
29 My husband is acting like an extra child in the family
30 Contepomi says Leinster can learn lessons from nature of Ireland’s defeat
31 Graham Dwyer referral could delay over 2,000 child abuse investigations
32 Steve Coogan: ‘Come Out, Ye Black and Tans is two fingers to the British’
33 Housing charity inquiry follows claims against ex-chief
34 Netflix has revealed its most-watched content. You might be surprised
35 ‘We would go back in a heartbeat’: Readers share their best family holidays
36 How much coffee should I drink? How much is too much?
37 Why Dr Seuss is the real hero of children's literature
38 A Dad with brain cancer: I was given 18 months to live, it put things into perspective
39 Jury finds Harvey Weinstein guilty of sexual assault, rape
40 UK’s immigration plan geared ‘to catch headlines’
Real news has value SUBSCRIBE