Joe McMahon says all the pressure is on Dublin 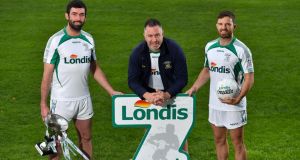 Regardless of what happens in the All-Ireland final and even considering Dublin’s drubbing of Tyrone last year, Mickey Harte’s legacy is secure.

Kerry and Dublin, pillars of Gaelic football with 65 Sam Maguires between them, repeatedly crashed against Harte’s team of the 2000s.

An otherwise great Kerry outfit lost their aura in the infamous 2003 semi-final, then lost a pulsating 2005 decider and finally an era-defining 2008 final.

Before the tide turned this decade, Dublin were defined as mediocre after repeatedly losing quarter-finals to Tyrone. Joe McMahon, the 14-season veteran, remembers it all.

“We didn’t have any fear about coming up against Dublin or Kerry,” said McMahon at the Londis Sevens All-Ireland launch in Kilmacud Crokes.

“It wasn’t arrogance, just total faith in what we were doing and the players we had could go out and fulfil our potential. In 2011 Dublin really took hold of the All-Ireland championship. They beat us – I remember watching that game recently – they were on song that day, Diarmuid Connolly hit 0-7.

“But 2010, the one off the post that fell into O’Gara’s hands, back of the net, that was a defining moment in where they are at the moment because they got over the Tyrone hoodoo and got revenge for...”

Revenge does not really count. Even those who remained from the three All-Irelands had grown old.

The wonder is how Harte draws a comparable performance from the 2018 crop. Last year’s All-Ireland semi-final was settled as soon as Con O’Callaghan’s early strike rattled the Hill-end net. The problem, as McMahon saw it, was Tyrone’s inability to adjust, to contain Dublin once they broke free.

“Tyrone cruised to Ulster winning by seven- and nine-point margins in most games. They were quite one-dimensional in their play because they got ahead of teams and were able to sit back and absorb pressure. They did that to great effect.

“When Dublin got on top, Tyrone were unable to adapt as they had done in previous seasons when they had success. They were found out that day with Dublin coming out on top by 12 points. I think Mickey has learned a lot from that.”

Jim McGuinness, the last manager to oversee a win over Dublin in championship, stated this week that Jim Gavin’s men can only be stopped by sucking the life out of the game. But McMahon sees another way.

“Any time Mayo, in their battles with them, pushed up on top of them they got the better of them, by putting the pressure on. Tyrone may look at last year and be happy to absorb that bit of pressure in the early stages, not making it pretty, slowing the game down and denying momentum.

“It is going to be a huge tactical battle. I imagine there will be a lot of analysis done by Mickey and the team – they will be looking to find weaknesses in the Dublin set-up, there are a few questions that need to be asked of this Dublin team.”

“I would say defensively. I would imagine if Tyrone push up and exploit the spaces they like to create; when they have their half forward line pushing up and half back line pushing up there are spaces. There’s opportunity for the inside line to take their man on a bit more. Draws fouls or the likes of Peter Harte and Tiernan McCann coming off the shoulder to exploit those spaces. An option is Richie Donnelly at full forward to play a few balls in, with him as a target man, and the inside men working off him.

“I know Dublin will be asking questions of Collie Cavanagh dropping back. I don’t think Tyrone can afford giving freedom to James McCarthy and Brian Fenton. There is more questions about Peter Harte needing to get himself more involved and Niall Sludden because we know the attention that will be drawn to them. I think those fellows need to take the game on more, ask more questions of their men.”

“Harte and Sludden, they’re natural footballers like Stevie O’Neill, like Brian McGuigan, they’re at that level, they’re able to adapt and read a game themselves.”

The noughties have been and gone but McMahon is not without hope.

“All the pressure’s on Dublin and nobody, as you know, is giving Tyrone a chance. Tyrone will relish that, without a doubt. I would love to be in that position as a player, when nobody’s giving you a chance because you can just go out and play and if you get beat, so what, everybody knew that and if you don’t and you go out and win, there’s a big surprise element to it but I definitely think they can give it a go.”