Rite&Reason: As I chased my grandmother’s spirit, I made other discoveries about my family 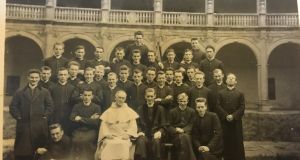 A picture from Spain. ‘He is photographed sitting in the front row (first left) of his class of young hopeful priests with his arms folded looking rather disgruntled while the other men smiled.’

I once sang in public on a weekly basis in Seville when I was studying the Spanish language and flamenco dancing. I always had an urge to go there. I thought it was because my father often spoke about seeing El Cordobés, a famous matador of the 1960s. His photographs from bull fights sparked my interest.

My father’s own interest in Spain was inspired by photos of his uncle Peter, who had shrapnel in his scalp from confrontations between church and state at his Spanish seminary.

My late grand-uncle Peter O’Grady studied for the Catholic priesthood at the Irish College in Salamanca. It was founded in 1592 for Irish seminarians driven to study in Spain to avoid persecution in Ireland by the English.

Fr Peter, from Ballaghaderreen, Co Roscommon, was ordained on April 1st, 1933, in Madrid with 73 others. He knelt, in secret, on bare boards in a hall from 6am until 11am. It was a troubled time in Spain’s history.

As he wrote in his American parish newsletter on the 50th anniversary of his ordination in 1983, “priests and religious were not looked upon too favourably”.

“Convents were being burned and religion became an object of ridicule. Communism was raising its ugly head and had a foothold among the poorer classes. The stage was being set for the bloody civil war that soon was to follow. So our ordination ceremony was a secret affair. I often wonder how many of the other 73 still survive? Many were killed – 3,000 priests in all.”

I was unaware of the dangers in my grand-uncle’s past as a priest. I also didn’t know he taught Spanish in a Jesuit high school in Spokane, Washington, where I found his tombstone during a cross-country road trip featured in my memoir Migrating toward Happiness: The Soundtrack to my Spiritual Awakening.

In the book I replicate my Waterford immigrant grandmother’s 1957 road trip across the US from New York to Spokane in my grandfather’s ‘57 Chevy Bel Air. She didn’t have a driver’s licence. My grandfather forbade her to get one, but she secretly did so and drove out west to visit her favourite brother-in-law.

She and Fr Peter had secrecy in common. And their clandestine endeavours brought them great joy; he loved being a priest in service to his community, and she loved the freedom of driving on the open road 3,000 miles across the US when women of her time did not leave the kitchen or their husbands on adventurous independent road trips.

Researching family history for my memoir I came across photographs from my uncle’s time in Spain. They were printed on post cards in Salamanca. He wrote on the back of the images he sent home to Ireland with messages about goings on there at the time.

In one he is photographed sitting in the front row of his class of young hopeful priests with his arms folded looking rather disgruntled while the other men smiled. I only ever knew him to smile.

My handsome uncle, with his thick black curls, was a “character” in the Irish way. He could have been a comedian with his sense of humour. He brought joy wherever he taught as a Jesuit, the scholarly order of the church.

He was also a fine musician. He played the flute, and well-known traditional musician Josie McDermott composed a tune for him called Father O’Grady’s Trip to Bockagh, after the townland Fr Peter was from.

In replicating my grandmother’s road trip I was chasing her spirit. It led me to Fr Peter’s tombstone. The date of his death carved into its façade was June 16th, known across the world as Bloomsday, the date on which James Joyce set his epic novel Ulysses.

As I stood at his tombstone reflecting on these ironies the water sprinkler came on. It only sprayed the row where I was standing at his graveside. It felt like this seemingly targeted touch of Irish mist was hardly coincidence.

Tara O’Grady will be reading at the Frank McCourt Museum in Limerick on September 29th, after teaching at the Ireland Writing Retreat in Donegal from September 23rd. Further details at www.taraogradymusic.com