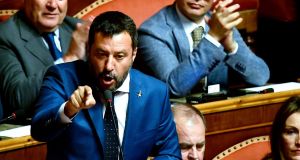 After failing to secure the dismissal of ministers opposed to his policies, Italian deputy prime minister Matteo Salvini called for the winding up of his own government and early elections. Photograph: Filippo Monteforte/AFP/Getty Images

Political crises are not unusual in Italy. So perhaps it is not surprising that the country may be facing a new election just 14 months after the formation of a coalition government with a comfortable majority in parliament. That government, led by the technocrat Giuseppe Conte, rests on a power-sharing arrangement between the country’s largest party, the “anti-system” Five Star Movement (M5S) of Luigi Di Maio, and the far-right Lega, led by Matteo Salvini.

Apart from a shared populism – perhaps more a political style than a philosophy – the two parties appeared to many commentators to have little in common, their alliance being more a matter of electoral arithmetic. The Lega’s traditional base was in prosperous northern Italy, M5S’s in the poorer south; the Lega supported tax cuts favouring business, M5S a universal “citizen’s income” to combat poverty, particularly in the south; the Lega supports large infrastructural projects which M5S opposes on cost and environmental grounds; both parties fulminate against “Brussels”, and both oppose immigration, the Lega’s Salvini more loudly and in language often laced with crude, xenophobic sentiments.

On August 8th, after failing to secure the dismissal of ministers opposed to his policies, Salvini announced that there was no longer a governmental majority and called for the winding up of his own government and early elections. Constitutionally, however, it is President Sergio Mattarella who decides when elections will be held. Many politicians outside the Lega may feel that it is more urgent at this time to prepare next year’s budget – Italy’s public debt is the second-highest in the EU – than to hold another election. M5S would also like to allow time for a referendum on its proposal to slash the number of parliamentarians from the current remarkably high figure of 951. But this could involve delaying voting to next year.

In March 2018 the Lega won 17 per cent and M5S 33 per cent of the popular vote. Today, after an experience of government that has been disastrous for the “anti-system” party, the Lega is polling at 36 per cent and M5S at 18. Fortified with this support, Salvini feels it is time for him to assume “full powers”.

Arithmetically, there is another possible majority in parliament of M5S and the centre-left Democratic Party. But such an arrangement was rejected last year and now might be just a time-delayed gift to Salvini, the rising man. Given the current level of support for the Lega, and for other right-wing and “post-fascist” parties likely to back it, it may be that a Lega government cannot be blocked for very long.

The day that it assumes power will be another challenging one for Europe, and perhaps a dangerous one for Italy too.

1 Paraic O’Donnell: MS is meticulously destroying me. I am being unmade
2 ‘Exposure doesn’t pay bills’: What artists say about freebie culture
3 ‘My new greatest fear – losing my child – colours everything in the day’
4 Rape victim verbally abused in courtroom after two men are jailed
5 Dancing with the Stars has hit Father Ted levels of farce
Real news has value SUBSCRIBE