Northern Ireland has become emblematic of the UK’s Brexit project

The backstop represents all that British Eurosceptics dislike about the EU 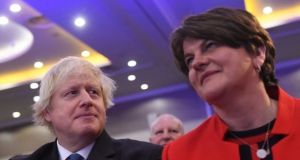 ‘The UK government is coming to meet the Irish government in battle over the interpretation of the 1998 agreement itself.’ Photograph: Clodagh Kilcoyne

It was only a matter of time before the British government would have to come to a decision. Would it downplay Northern Ireland’s importance to the withdrawal process or play up its significance for the Brexit project as a whole? It has chosen the latter.

The UK-EU stand-off over the backstop is no longer in the realms of negotiation. The topic has become a mutually incapacitating snare. The more forcefully one side stresses its position on the backstop, the more justified the other feels for not bending from its opposite bearing. And thus the noose tightens.

Getting out of this bind is increasingly difficult because Johnson has posited the abolition of the backstop as an iconic issue for demonstrating UK sovereignty itself.

The scrutinising is increasingly taking the form of examining the purpose and need for the backstop in the first place. And they are finding cause for suspicion

This is a curious thing to do because Northern Ireland is already a place over which the UK has ceded a significant amount of sovereignty, not least through the Good Friday (Belfast) Agreement. But the British government does not view Northern Ireland in those terms.

Instead, it sees the region as a testbed for UK sovereignty, British identity and resolute steadfastness in the face of foreign threat. For it, the backstop exemplifies all that poses a threat to these principles, ie European integration, from which they are ideologically committed to being as free as possible.

Boris Johnson’s government appears determined on a hard Brexit, with a fairly minimalist trade agreement with the EU. All things being equal (and leaving with a deal), this would mean that the backstop would inevitably come into play. No wonder the British are scrutinising it more than ever before.

But their scrutinising of the backstop is not the kind that better understands the specific clauses, measures and implications of the contested protocol. Instead, the scrutinising is increasingly taking the form of examining the purpose and need for the backstop in the first place. And they are finding cause for suspicion.

Whereas May’s government had accepted in principle the reasons why the avoidance of a hard border went hand in hand with upholding the 1998 agreement, Johnson’s is much more sceptical. It is not only querying exactly how important the openness of the Border is to peace, it is beginning to ask whether the very premise of the backstop is in breach of the agreement itself.

Given the risks of a no deal to Northern Ireland, it is significant that Johnson has ignored the path of least resistance

This argument is more nuanced than the ones we have seen in the past from Brexiteers, who claimed Varadkar and Coveney’s insistence on the backstop is merely a form of unreconstructed irredentism. Instead, the UK government is wondering whether to concede on the backstop would mark a devastating sacrifice of sovereignty, national identity, and legal jurisdiction. All this would be, in its view, exemplified over what happens to Northern Ireland, and specifically, what it would mean for unionists there.

The debate over the backstop has risen to such a point that what happens in post-Brexit Northern Ireland is now seen by both the UK and Ireland as emblematic of their capacity to protect and represent their citizens.

And yet its policy is to pick “no deal” over ‘no Brexit’. This is no idle threat.

Given the risks of a no deal to Northern Ireland, it is significant that Johnson has ignored the path of least resistance towards getting changes to the protocol that would please Brexiteers. He could have sought to remove the all-UK dimensions to the backstop, have a harder (customs) border down the Irish Sea and (in theory at least) be done with it.

The fact that he hasn’t taken this route is not only a sign that he is not (yet) willing to “shaft” the DUP but actually that the Northern Ireland-specific dimensions of the backstop are now very much on the British radar too. This is not necessarily a form of newly rediscovered unionist sentiment from England. But it does mean that Northern Ireland is now seen as totemic for the UK’s Brexit project.

The backstop has come to represent all that British Eurosceptics dislike and distrust about the EU: infringement of sovereignty, democratic deficit, “competence creep”. At the same time, it embodies what Irish politicians have long lauded the EU for: protection for small states, enabling trade, defusing the symbolic and practical significance of borders.

When either side refers to the “backstop” they are not really talking about what it is but rather what it represents. And both sides have made the stakes as high as possible.

So once again, as in 1690, English and European governments are shaping up to use the island of Ireland as an ideological battleground. And possibly, as in 1690, apart from occasional forays, they will leave the locals to live with the consequences for generations to come.