Brian Boyd: Can anyone conceivably view the word potato as an ‘ethnic slur’? 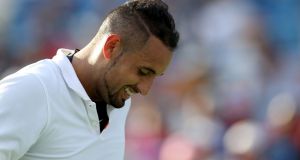 The pathetic irony of labelling Nick Kyrgios a racist because he used the word potato is that the tennis player himself has been the subject of racist abuse most of his life due to the fact that he is of part Malaysian descent. (Photo by Rob Carr/Getty Images)

At a tennis match in Cincinnati last night, the Australian tennis star Nick Kyrgios had a difference of opinion with the chair umpire officiating the match. For Kyrgios (who is this generation’s John McEnroe but with a wider and deeper vocabulary of expletives and insults) the umpire was “the worst f**king referee ever”. At the end of the match, which he lost, Kyrgios added that the umpire was a “f**king tool” and spat at him.

None of the above is occupying some Irish minds’ this morning though. What is being focused on is that Kyrgios repeatedly used the word “potato” as a (deep breath) “racial slur”. Turns out that the chair umpire last night was an Irish man (the highly regarded Fergus Murphy) and that Kyrgios’ use of this, “historically inflammatory” term was an “ethnic slur”. Nonsense on stilts.

Anybody who knows anything about Nick Kyrgios knows that he habitually uses the term “potato” to describe those he doesn’t like/disagrees with. It doesn’t matter if you’re Canadian or Japanese or, God forbid, Irish, Kyrgios will describe you as a “potato” in a completely indiscriminate manner.

Sadly then, Kyrgios was not being racist to the Irish people last night and the martyrdom procession on social media has been cancelled. But what if Kyrgios didn’t spray around the “potato” insult to all and sundry, what if he actually reserved it only for Irish people? Can anyone conceivably view the word potato as an “ethnic slur” or racist terminology?

If you answer Yes to that question, you might want to have a quick chat with anyone, anywhere who deals with real and threatening racism on a daily basis and get some badly needed perspective into your tiny, resentful and sour little mind.

The pathetic irony of labelling Kyrgios a racist because he used the word potato is that the tennis player himself has been the subject of racist abuse most of his life due to the fact that he is of part Malaysian descent. Just last year - in echoes of what Donald Trump said to Congresswoman Ilhan Omar last month - Kyrgios was told by the Australian sporting legend, Dawn Fraser to go back to where his parents came from - on account of his bad behaviour on the court.

The racism Kyrgios has been subjected to has been slammed by his fellow Australian tennis player, Evonne Goolagong Cawley. She knows of what she speaks: after winning the first of her Wimbledon titles in the 1970s, Cawley was out with her friends in Australia celebrating her triumph. On their way into a nightclub Cawley was told her friends were welcome to enter but she wasn’t. Her friends were white, Cawley is an Aboriginal.

The Kyrgios/potato incident illustrates perfectly how devalued and perverted our understanding of what constitutes actual racist language and behaviour has become.

Earlier this week, the CNN journalist Chris Cuomo, who is of Italian heritage, was called a “Fredo” by a man in a restaurant. Fredo is a little known phrase which dates back to Francis Ford Coppola’a classic Godfather films of the 1970s - it is the name given to the feckless, dim-witted son of the Corleone family. The only outings it gets in public discourse these days are when it is used to describe Donald Trump jnr - as in the feckless, dim-witted son of Donald the President.

Cuomo reacted violently to been called a Fredo - threatening to throw the person who called him the term “down the f**king stairs”. Cuomo stated calling someone of Italian heritage Fredo was the same as using the N word to describe a black person.

Fredo is an unflattering term drawn from recent popular culture. It is not racist - it is nowhere near the wicked degradation of the N word. Cuomo, in his idiotic comparison, was not just doing all Italian-Americans a disservice but unilaterally trying to rewrite the definiton of racism in a ridiculously self-serving manner. Similar in stupidity and insensitivity to those saying that Kyrgios is racist for calling someone a potato.

This constant lowering the bar of what constitutes racism does everyone a disservice. Godwin’s law is instructive here - it was formulated by the American author Mike Godwin and states that “if an online discussion (regardless of topic) goes on long enough, sooner or later someone will compare someone or something to the Nazis or Hitler - the point at which effectively the discussion ends”.

For Godwin, his law was put in place as a rhetorical and pedagogical measure – “I wanted folks who glibly compared someone else to Hitler to think a bit harder about the Holocaust,” he says.

Cuomo glibly compared the term Fredo with the N word, Kyrgios angrily called an Irish umpire a potato. We need to think a bit harder about what is racist and what is not.