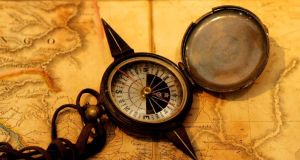 Way forward: Thoughts can became actions that change the world, in ways that appear small but are in fact unmeasurable. Photograph: Kieran Doherty

Grace is “a thought that changed the world”. So sang U2 in Grace, a track on their 2000 album All That You Can’t Leave Behind. It is an audacious claim, bathed in the hope that it is possible to transform the pain of human life, finding “goodness” and “beauty” in “everything”.

But early in this new year, we might reasonably ask if it is too late for grace to change our world. Have we passed the point of no return with climate change?

Notwithstanding the return of power-sharing at Stormont, has Brexit damaged the political relationships within Northern Ireland and between Ireland and the UK beyond repair? Are there people in your life you have hurt too much for you to reach out to them for forgiveness?

Yet the experience of grace is itself usually unexpected. As a child raised in an austere Baptist church in rural Maine, I was taught that grace means “unmerited favour”. With an emphasis on “unmerited”.

Tears are the words of your heart

But while reflection on our own shortcomings is always uncomfortable, there is wisdom in it. It can inspire gratitude for grace’s surprising mercies, and encourage us to extend that same unmerited favour to others.

U2’s Grace personifies Christ as a woman who “covers the shame” and “removes the stain” of sin in the world. Likewise, those rural Maine preachers emphasised that Christ is the great, cosmic giver of grace.

In 1972, a teenage boy from Ballycastle, Co Antrim, felt utterly abandoned by the great, cosmic giver of grace he had learned about in his Presbyterian Church. Terry Laverty was just 15 years old when his brother Robert, an 18-year-old officer in the RUC, was shot dead in an IRA ambush.

In his grief, Terry spent hours crying as he stalked up and down the beach in Ballycastle, shouting at God. One day he was ruminating about the futility of God “gathering our tears in a bottle” (Psalm 56:8), when suddenly he felt God speaking to him: “Tears are the words of your heart.”

For Terry, this was an unexpected grace, which made him aware of the tears of all who were suffering in the Troubles. He felt comfort in God’s presence, and a freedom he had not experienced before.

I interviewed Terry, 44 years after this encounter with God, as part of a research project on how Presbyterians responded to the Troubles. By that time, he had been a Presbyterian minister for decades, and was nearing retirement.

He had pastored many people who had not experienced or even contemplated grace.

He did not condemn them, but rather used our interview to offer an invitation: “I want to encourage anybody who is struggling as a result of violence and trauma to consider grace, to consider the hope that Jesus offers, to consider that there is a possibility of living without bitterness and walking on as somebody who is amazingly and wonderfully free.’

During my research, I learned that experiences of grace need not be as dramatic as Terry’s. In fact, for many people grace did not “find” them, as U2 sang, nor did they just “consider” it.

Rather, they created grace: from a schoolteacher who comforted children after a life-changing atrocity, to widowed mothers who raised their children without bitterness, to victims who prayed for their loved one’s killers.

Fr Gerry Reynolds, the Redemptorist whose work with Rev Ken Newell in the Clonard Monastery/Fitzroy Presbyterian Fellowship earned the 1999 international Pax Christi prize, often said that peacebuilding consisted of “working with God” to find the “next right thing to do every day”, no matter how insignificant it might seem.

Such thoughts became actions that changed the world, in ways that appear small but are in fact unmeasurable.

The continued need for actions that change the world has inspired the theme of the eighth 4 Corners Festival in Belfast, “Building a city of grace” which takes place from next Friday, January 31st to February 9th.

Dr Gladys Ganiel is a sociologist at Queen’s University Belfast and a member of the board of directors of the 4 Corners Festival. She is author of Considering Grace: Presbyterians and the Troubles (with Jamie Yohanis) and Unity Pilgrim: The Life of Fr Gerry Reynolds CSSR